So now the murder investigation begins. Contrary to what i thought, Frank was not found in the office, he was at the bottom of the stairs. Did he fall? Or was he pushed? Sally found the body so she's first up with statements, and dna stuff. Peter hasn't come home and when he does, he's covered in blood. Aww Pity the police investigator in charge isn't the lovely DI , the one that was after Fiz. 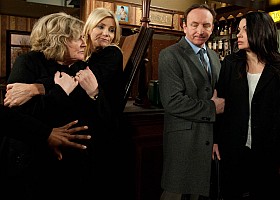 Sally was being questioned at the police station overnight and then in the house. How on earth would Michelle know what she was telling them? Carla is terrified Peter's done it because she knows he was angry and drunk and he can't remember anything. Frank's distraught mother says it's all Carla's fault. DI Nash covers all the bases, questioning all the suspects and putting a case together. Carla certainly seems to have a pretty good motive for killing him.

So Peter is the next one being questioned, this time at the police station. But so far, no evidence. Anne wanted to make sure the police knew about the missing contract meaning Carla owns the majority of the factory, not Frank, or, as his next of kin, possibly her. It's also a good motive for Carla to be the killer. Anne really laid into her in the pub didn't she? Dragged up all the old laundry and nearly went hysterical. Carla was arrested at the end of it all. Stronger motive since Peter had to admit he was drunk and couldn't remember.

Carla was very cool under questioning. She didn't take any crap off the police. Every time they tried to trick her up, she was on them. She's right too. If she'd killed Frank with the bottle, she wouldn't have left it full of prints and blood, she'd have smashed it. I don't understand why Peter's prints weren't on the bottle, seeing as Carla was fighting with him over it earlier. He wasn't wearing gloves though, if she didn't kill Frank, the murderer must have been. You can't really selectively wipe fingerprints. It did throw her when Nash admitted he thought Frank was guilty of the rape. In spite of it all, in spite of her having the best motives in the world, it's just too obvious for her to have actually killed Frank. They had to bail Carla, no evidence to really lock her up so far. 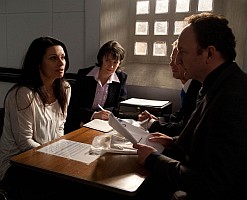 Why, when someone is questioned and they have their lawyer sitting right there, is the lawyer always silent? Surely some of the time, when the police are clearly browbeating a witness/suspect, the lawyer should speak up or caution their client not to say anything. Where *is* the contract anyway? They didn't find it in Peter's flat. And where's Jenny? She's disappeared. The cops haven't even mentioned her name. Kevin has come under scrutiny too but as much as he was angry about Frank mistreating Sally, I don't think he'd have done it either.

In the factory, everyone is fizzy with curiosity about what's going on, knowing nothing. Beth is callous and unsentimental but then she's not really got any history. Anne is determined to get her hands on Frank's share of the factory but since there's no contract, Carla is still majority owner and Michelle can still run the factory for Carla. Anne seems to have lost everything.

Where's the contract? Michelle had it!!! And naturally she didn't destroy it like any intelligent person would. I don't know why she thought taking the contract would have accomplished anything. That was a contrived plot device so that Peter could catch Carla burning it and now he thinks she did kill Frank. And minutes after Simon told him he was a horrible father, what does Peter the heartbroken do? He reacts and Carla realizes he thinks she did it and he then leaves the flat and confesses to the murder to save Carla, effectively abandoning his son. Nice. Idiot. But be fair, she wasn't able to convince a jury that Frank raped her. He probably figures there's even less chance of her convincing a jury that she didn't murder Frank.

Gail is unrelenting against Lewis. Audrey seems to be softening. Most definitely. And naturally, when money goes missing from the Bistro, Gail launches a crusade against Lewis when it was Eva all along. Leave it to Audrey to find where Lewis is living and it's a bit tatty looking. She feels all sorry for him and you know the circle is complete. She's going to have him back.


I repeat. A satellite dish is a receiver not a transmitter. It couldn't affect televisions and radios. For someone that seems like an internet non-user, St. Ella managed to trap Karl up on the roof, log in, list and sell the dish in record time. All in one day, afternoon and maybe even an hour!

Dennis found himself a job through an old mate in Birmingham. Rita was not best pleased to know he's leaving. Norris was. Tina spotted straight away that Rita was upset about it and Rita fake-cried all over Audrey later. (I know, it's not meant to be fake but it was appalling acting) They're encouraging her to say how she feels and of course she should! Tina sussed out Dennis' feelings too but promised not to tell Rita but when she did, it seemed like it was too late. That scene at night on the cobbles when we realized that Dennis didn't leave and felt the same way she did? Magic! A new romance and i couldn't be more tickled. I really like Dennis Tanner. The actor is fantastic and he just leaps on the screen with chemistry every time he's on 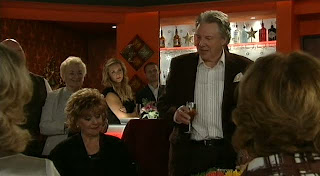 And Norris was petty, selfish, rude, annoying, and ignorant. As always. He may have lingering feelings for her and he would never accept anyone Rita fell for because it shuts the door on him. Nice to hear mention of Len, her first husband. Dennis would have known him. Rita did mollify Norris. She wants him to give a speech at the wedding as he's important to her. Aww but even if Karl ruined the pub celebration, the Bistro will do instead and Dennis set up the surprise for her! Sylvia is just as bitter about love as Norris, it seems. Who'd really want a sour old puss like him at their party or wedding, and why would you keep him as a friend if he's going to be like that? It was funny, though, everyone reciting memories, Norris bitching and complaining, and nobody paying him any notice at all. It's all down to jealousy, you know that. The engagement is brilliant and i'm chuffed to little mint balls and i'm going to pick out a hat for the wedding now before the rush is on! 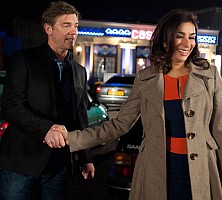 Sunita stunned both Karl and Nick when she arrived at the Bistro. She was looking pretty sharp! Now does anyone think Sunita would really go to a casino for her first time with a man she hardly knows? Even if she was a bit ticked and feeling neglected by Dev, I don't buy it. I'm not sure i like the sparks between Karl and Sunita. It's clear there's something there and it's clear there might be a rebound thing, both being unsatisfied with their partners and liking the attention from someone new.

Meanwhile, Karl seems to be in debt so his gambling must be getting worse. Shame on him for trying to wheedle a bit more out of Rita for the party payment. She wasn't having it and Stella found out too, so Karl got it once in each ear! This isn't helping his attitude towards his "beloved" is it? 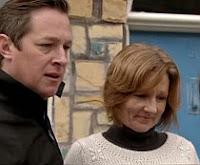 Paul and Eileen were out to dinner a few hours after Lesley scalded her hand. Now I know they left her with Marcus who's a nurse but it still seemed a bit cold. Audrey and Gail jumped to the wrong conclusion and accused Lewis of theft. Of course it wasn't him. That was too obvious. Now it's Paul and Lesley's wedding anniversary and she's only getting flashes of memory about it. She's getting worse and Paul can't let go and accept she needs more help than he can give.

What I don't get is why Roy's prints weren't on the bottle. He picked it up and held it in the air saying that he believed it was the murder weapon.
So how did Roy's prints not show up? How did Frank's not? How did Peter's not? All of them touched the bottle too.

I know, very sloppy writing. Jason's too! Even if the killer wiped it, Carla's prints wouldn't be on it anymore so if her prints were on it, so should everyone else's have been. Plus whoever worked in the shop where she bought it.

So why weren't Sally and Kevin at Rita and Dennis's do? The Websters have been special friends of Rita's for years...

I always find at gatherings like parties, weddings, funerals etc, there's always one or two characters that are missing that should be there and, conversely, characters attending that you wonder "why?". I imagine it's about actor availability and how many episodes a year they're contracted for etc. but it *is* jarring, I agree.

Yes, it took me a minute to figure out why Julie would be there -- because her father and Dennis were related. So why isn't Eileen there too? It's that, or try to squeeze onto the couch with Sean and Marcus? I could not believe Roy, the man who is so careful and prim, would touch a bottle he immediately said might be a murder weapon. No. I am though, loving that Audrey and Rita FINALLY have some love in their life. Both have been lonely for years, and both seem to have snagged some nice keep-you-on-your-toes guys.

It's wonderful that they can still give the older cast members good storylines instead of pushing them to the background.