Is this the fate of the current Coronation Street set? 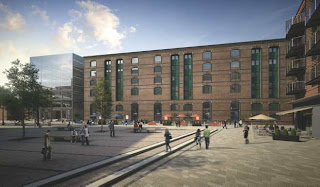 (This post was originally posted by Chewy on the Coronation Street Blog March 2012, reposted to this blog with permission.)


Manchester Evening News has an article today featuring plans of what will become of the old Granada Studios and Coronation Street set.

The picture to the left shows the Bonded Warehouse, which currently sits behind Rosamund Street Medical Centre among new developments, and a new public square.

It must be noted that the area shown is at the opposite side of the warehouse though, the set from this perspective is behind the large building.

While I am a Corrie fan, I can understand the reasoning for the set to be changed into a public area. I just think it would be a shame to demolish the street though, as it is a big attraction for the Castlefield area of Manchester and is an important part of the city's history.

ITV do appear to have plans for the set though, ITV's property director, Peter Copley is quoted as saying: "ITV is strengthening its commitment to the region through its investment at MediaCityUK but is also keen to leave a strong legacy in Manchester City centre. There's an opportunity at Quay Street for a project that extends the already-successful city centre and draws on the rich history and character of the site."

ITV is strengthening its commitment to the region through its investment at MediaCityUK but is also keen to leave a strong legacy in Manchester city centre.