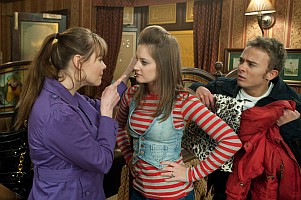 Peter's confessed to the murder because he thinks Carla did it but Leanne is, ironically, the one that can clear him. Carla didn't do it either. Sally discovers a clue. Kevin rages at how Frank treated Sally. Frank is buried and the killer is revealed in the aftermath, putting someone else's life at risk.

Kylie and Brian's feud over food escalates. Audrey takes Lewis back. Eileen struggles as she shares Lesley's care with Paul. Sunita is fed up and Amber causes more conflict between Dev and Sunita, escalating to an exit. Karl's gambling is proving to be a problem. Tina and Tommy move closer together. Tracy is still costing Steve more money.