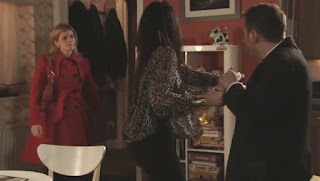 Carla cooks? Really? I suppose it's not that difficult to mess up Spaghetti sauce. But Leanne scuppered the plans because Simon didn't tell her Carla was supposed to cook. He'd rather spend time with his mum but low and behold, Peter went charging in with all guns blazing and there was a massive row in the middle of the pub with poor Simon being pulled from pillar to post. *That's* helpful. Faced with Simon's hate and his father's disapproval, Peter went straight for the bottle. Ken's right, Peter always does throw Ken's failings back at him but you'd think by now Peter would realize Ken regrets the past and is trying to give him good advice. But he's too resentful to get it. Carla got drunk too but didn't want to do it in front of Peter. It didn't matter, did it? Carla caught Peter anyway and Leanne caught the pair of them fighting over a bottle. Ammunition for a custody case. And Peter isn't going to meetings, he's necking booze and it didn't take very long for him to get legless.

Frank really seems to be making excuses not to be with Sally and we know now he's seeing that client, Jenny, much younger and more vivacious and probably doesn't serve him frozen meals for two from Frescos either. (Though you notice, Jenny does have a similar look to Carla?) Mama Anne stumbled on the affair and though she doesn't really like Sally, she hates Carla more and she did think Frank was leading Sally on and warned her. Naive Sally learned the hard way, confronting Frank and finding Jenny in his house. Ouch. He managed to scare her well and truly and as much as admitted that he raped Carla to make sure she didn't spill his plans for the factory.

Meanwhile, Jenny is trying to persuade Carla to take Frank's low offer, set up on her own and she'll give her lots of business. Only she's in cahoots with Frank and they're just out to screw Carla over. She was good, was Jenny, played it pretty cool for the most part. Carla decided to take Ken's advice and take Jenny up on her offer to break some of the tension at home. Less stress will give her more time to prop up Peter and get Simon on board. Maybe. But it all fell apart.

I really like Frank's mother, as in like to hate. She's not that sympathetic but the actor is fabulous! She even looks a bit like Frank! Frank was really cold to her, wasn't he? He considered she betrayed him and that's it, you're out. Besides, with a beautiful piece like Jenny on his arm, he's not going to want mummy around. Why on earth did Carla go back to the factory? What was the point? Well, plotwise, he had to admit he raped her so she could be a suspect because... 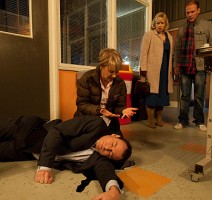 Did you notice how everything fell this week? All the typical soap cliches laid out while leading up to a murder in order to lay suspicions. Everyone's got a motive. Peter found out that Frank registered the complaint. He was ready to go all guns blazing, forget Carla's problems. After all, it only caused a bit of inconvenience. Carla has every motive in the world. Sally is the woman scorned and Kevin is raging because Frank used Sally. The powers that be even put Michelle forth as one of the suspects because she went back to the factory later. I doubt that was a serious offering. All she ever does is bark like a terrier and say things like "Yeah, you just leave us alone" and "Nyah! Bite me!" (or similar, you know.. just noise, no substance) However if Jenny overheard Frank threaten Carla or if he threatened her, she could have done it in self defence and even his mother could have done it in a fit of anger if she heard him with Carla. They're the two "expendable crew members" and either one would be my first guess though my money's on his mother. She's grieving, she's impulsive, she'd be pretty pissed that he really did rape Carla after all. I wouldn't think that, if she did do it, that it would have been planned. 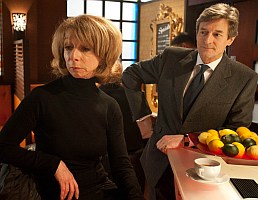 So Lewis got community service for robbing Peter of a couple of thousand pounds. And what are the odds that he gets to do it right on Coronation Street? Now he was so smooth with the restaurant critic that Nick has hired him, much to Gail's annoyance. So that Norris can spit nickels and Audrey can feel sympathy, that's why. And you know, I can understand why Gail doesn't trust Lewis but she is so rude to him! She's really horrible isn't she? What are the odds that Lesley wants chips so Paul brings her to the chippy on Rosamund Street? Sky high odds, so that he can passively aggressively wheedle Eileen into looking after Lesley again. After what happened the last time, you wouldn't think he'd want to try that again.

Ouch, Lesley didn't recognize Paul. That has to be crushing. So Deirdre and Craig are bonding over pottery! Stella doesn't seem to think much of Karl does she? Doesn't seem to really respect him much. And that satellite dish? It looks like it's the size of a planet! I didn't think they needed to be that big these days. And as for it interfering with Ken's tv? it's a *receiver* not a transmitter. Fail.

I'm really really annoyed that Norris keeps digging at Dennis for not having a job. He's got to be getting his pension. Just because Norris and Rita are still working doesn't mean they *have* to. They would be drawing a pension too so could support themselves. Dennis has an address now so he could contributed to the expenses with his pension.

My only regret about Tony's death is that he missed a telling off by Sean and Julie. Wouldn't that have been great?

Thanks for the update. (I learned about this site from Corrie Canuck, and it is really good!)

Thanks!
But then if Sean and Julie had told him off, he would just have ran them back out and sacked them right there on the spot!

It occurred to me that while many actors talk about the fun of playing a villain, because it's more interesting than a "good" character, they must also have to accept that at some point they'll meet an undignified,ignominious end, especially if they're on a soap, where the inadequacies of the justice system are corrected artificially.

Yes i would expect so. But some of them do hang on longer than others. Still, villains can't be seen to get away with their crimes.