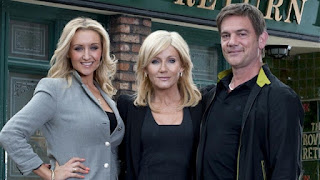 (This post was originally posted by Clinkers (David) on the Coronation Street Blog in April 2012.)

To paraphrase Shakespeare (or possibly Margaret Drabble), she's more sinned against than sinning. I speak of the saintly Stella Price, the Rovers landlady who suffereth like no other ever to tread t'cobbles. Are we warming to this (bottle) blonde harridan? Do our eyes moisten as we watch her face life's hard battles? 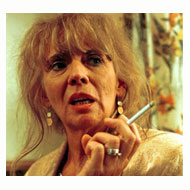 Let's face it, Stella has hardly been blessed with the most joyous of families. Her partner is a gambler with a Lancashire accent so thick that Mary's mobile home could get stuck in it. One of her daughters is a wooden spoon with a blonde wig and has no discernible personality. The other is coke-snorting ex prozzie who shrieks and seems welded to her ugly red coat. Soon to arrive on the scene is Stella's mother, Sheila Grant/Barbara Royle, who will no doubt spend her time either screaming in anguish or asking Stella what she had for her tea. 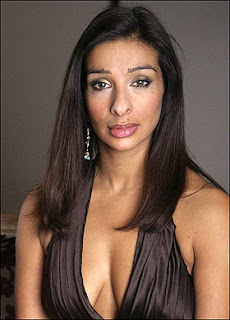 Then we have Stella's staff. Oh dear. She's stuck with dreary old Sean, a twenty-first century Bet Lynch who'll be slipping into single entendres before the year is out. Poor old Stella also has to contend with Vinegar T*ts Tina, surely the world's sourest barmaid. With her miserable dispostion and lived-in face, it must come as a relief to have any customers left at all. Then we have Sunita, wicked old unfaithful Sunita, dressed as if she was an accountant who had popped into the circus big top on her way in. Surely Stella has realised that all Sunita ever does is arrive, jiggle her baps around for a few minutes, look worried and then collect her coat and march out.

Stella needs to increase her takings in order to pay off Karl's debts. It may take some time, as she's hardly going to rack up a fortune based on Ken's half pint and Emily's sweet sherry. No, she needs to cultivate some of the borderline alcoholics. Deirdre's the kind of woman who would probably slurp wine from a plastic bucket given the chance and Rita must be 90% vodka at least by now.

So let's form a caring circle around this most misunderstood of women. Weep into a pint pot at the very thought of her plight on those northern backstreets. People of Britain (and Canada of course) - Stand Strong with Stella!

Every time Sunita says "stella is my friend" I want to say "seriously?" I mean really, who is Stella's friend? I don't mind her character, I just don't see her as an intricate part of the street. And she keeps being presented as though she is.
Can I just say that when I saw Tina pulling a pint last week with a wooden toothpick clenched in her jaw, I was a little bemused. This is the pretty young thing behind the bar? Even Kylie has more class than that!