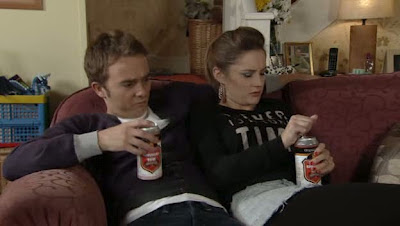 Steve coping with his new roomie.
Deirdre stubbing out her ciggie in the Ken cup.
Eileen giggling about Steve's new roomie and finally, a renewal of their friendship!
The Bickering Barlow's split over the lazy freeloading daughter.
Gail hating an atmosphere when she's the one causing most of it.
Lewis being perfectly charming, oily and smooth. I still don't trust he's changed!
Sylvia instructing Tracy on manners.
Tracy and Deirdre eating take out and giggling over Ken's kimono.

Audrey and David falling out. That's kind of sad really. They've been so close but he really does believe Lewis is out to fleece her.
Audrey calling Kylie "Lady Flamin' MacBeth"
Gail getting drunk in the Bistro.
In fact, I'm going to love this whole storyline! Stonefaced Gail, Kylie MacBeth pouring poison in David's ear, Audrey defending Lewis and fighting everyone with only Nick on her side. The War of the Salon begins!