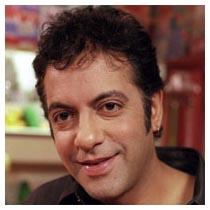 (This post was originally posted by Scott Williston on the Coronation Street Blog in April 2012.)

It seems appropriate to turn our attention to Dev Alahan on All Fool's Day.  Is there a character on British television more strange, more unique, more just plain weird than our favourite shopkeeper?  With his natty suits, his flyaway hair and most importantly, his UTTerlY bizARRE way of SPEAKING, he is a character who both enriches and amuses.

He arrived in 1999, as part of Corrie's strict "one in, one out" policy for ethnic minorities.  When Saeed Jaffrey left the show following, ahem, "difficulties" in his personal life, Dev arrived, in the not at all stereotyped role of an Asian grocer with a string of corner shops.  Short of wearing a turban and saying "oh dearie me" a lot, he couldn't have been more clichéd on paper.  He had one valuable plus, though: sex appeal.

Yes, this particular Hindu was far more interested in girls than Ganesha.  He swept in with a psycho ex-girlfriend who faked a suicide attempt to capture his attention.  We learnt our lesson there and then: just a taste of Alahan is never enough.  The pinnacle of this would be "Mad" Maya, who reacted to the news that Dev wasn't that keen by blowing up his shops, getting his fiancé arrested for bigamy and attempting murder.  Who can blame her?  One glimpse of his furry torso and women fall to their knees, devastated by his suave demeanour and ability to get them cash and carry prices on Andrex.

His list of conquests is long and distinguished.  There was Geena, the now forgotten tousel-haired barmaid who nearly became the first Mrs Alahan, "Bob" from Blackadder, and in a moment of madness, Tracy Barlow.  He soon regretted this when she smashed his flat to pieces, ostensibly because he wouldn't marry her, but more probably because he once slept with her mother. 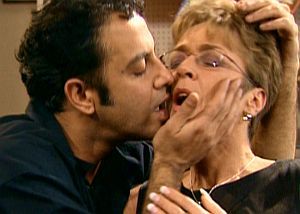 Yes, in a storyline that still lives on in infamy, Dev avoided having to watch the Queen's Speech by bedding Sexy Specs herself, Deirdre Barlow.  Department of Health officials have since concluded that their unholy union was responsible for more dodgy tummies that Christmas than a million undercooked turkeys.  Their tryst is still spoken of in guarded tones today by Corrie fans, along with the retina-burning episodes where Len Fairclough experimented with his sexuality down by the canal and Ena Sharples modelled Gamma Garments' new range of tanga thongs in the snug.

After dallying with Deirdre, the only way was up, and our hero soon found love in the arms of Sunita Parekh, one of his shopworkers.  Sunita - a ditzy, kind-hearted girl played by Shobna Gulati, who bore absolutely no resemblance to the ditzy, kind-hearted girl played by Shobna Gulati in dinnerladies - bewitched him with her generosity of spirit, her happiness, and her brain tumour.  While most people recover from a near death experience by doing all those things they wanted to - climb Everest, go hand gliding - Sunita realised that all she wanted was to sit behind a shop counter for the rest of her life, and married Dev. 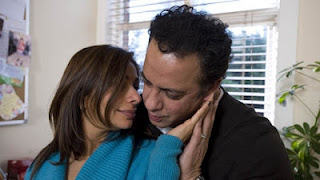 They were soon joined by the twins, Aadi and Asha, and had a posh semi out in the suburbs.  Everything should have been perfect, until Sunita discovered that Dev's loins were rather more fertile than she had previously thought.  In fact, it seemed his entire retail empire was staffed by former conquests, each of whom had a bassinet upstairs.  Dev denied the children were his, but when Sunita heard the babies crying in a rollercoaster of strange notes, pausing only to widen their eyes and make jazz hands, their parentage was in no doubt.  She kicked him out and promptly vanished with the twins for years.

Throughout all this, Dev was an alpha-male of the Street, the kind of man who has problems walking with his legs together because his balls are just that big.  He drank whiskey with the local movers and shakers - well, Mike Baldwin and Steve McDonald, Weatherfield's answer to Steve Jobs and Bill Gates.  He dined with the Asian Business Federation, a group of anonymous gentlemen Dev sucks up to on a regular basis.  And he took up golf, surely the definitive sign that you are a man awaiting a comfortable death in a leather armchair.  He was hairy-chested, confident and brash; his soaring ego and self-assurance may have been related to Jimmi Harkishin's fondness for certain recreational substances, but it made him a man who was hard to ignore.

Without Sunita, though, there was a certain emptiness in Dev's life.  His daughter Amber couldn't fill this void, particularly as she spent most of her time pointing out what an idiot he was.  He needed love.

Dev bounced back by seducing Nina Mandel, the wife of his business associate and a former Bollywood star.  Suffice to say that her days of shimmying seductively in a sari were long behind her, so he naturally moved onto her daughter, Tara.  Given his previous seduction of both Barlow ladies, this should have come as no surprise; in fact he seems to work his way through families more easily than a recessive gene.  Tara  reacted by placing a twenty foot high portrait of a naked Dev on the side of Victoria Court.  Part of him was delighted at this advertisement - he had to be restrained from climbing up there and painting his phone number across the top - but another part realised that his relationship with Tara was over.

Fortunately, at around this time, Sunita reappeared on the scene.  She was blissfully happy in a nice house with a handsome fiance, so naturally Dev intervened to put a stop to all that.  With the help of a couple of comedy Aunties straight out of Goodness Gracious Me, he pushed his feet back under the table at Chez Sunita.  The house was sold and with the profits they bought number 7 Coronation Street; one can only assume that the house was suffering from an absolutely horrific amount of negative equity.

The tram crash saw Dev's shop destroyed, his assistant Molly killed, and Sunita buried under a heap of rubble.  Worse, it caused the death knell for his empire, as he revealed that insurance was something he'd never really got round to.  This financial crisis caused him to reach a low point, disposing of those other shops we'd always heard about but never seen but somehow managing to keep hold of the Coronation Street store and his home.

Now his relationship with Sunita is on the rocks; there are only so many times a woman can sell Tampax to Gail Platt while he visits the 19th Hole before resentment builds up.  The scene seems to be set for a battle royale between the Alahans.  It should at least mean that Dev gets a few emotional scenes, which are always a joy to behold; he whinnies like a Derby winner, rolls his eyes and then punches some inanimate object before huffing his way out the door.  He's a man who occupies his own space-time continuum - barely human, barely normal, always fascinating.

Hee! Thanks for making me laugh out loud this morning over here in Saskatchewan.

Here in Manitoba too. Loved it!