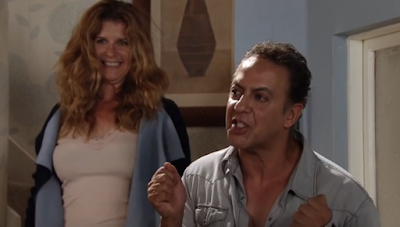 
How are Sally and Gina getting on before this week?

They are very different characters so Gina went against Sally’s bid to be a councillor which was quite tricky for both of them. But Gina found out that Sally was doing it for her and mental health so she got behind Sally and they were a unit again, getting on really well.  But Gina is always very unstable so you don't know what she is going to do to embarrass Sally or bring her back down to what she remembers her to be.

Sally’s mayoral inauguration party is in full swing, until two bailiff’s arrive, what happens next?

Now Gina has been burying her head which she does quite a lot. She has been told that this is going to happen but she has been in denial so she is still quite shocked when the bailiffs turn up. She tries to sneak out, again she tries to run away! She doesn't see the fact that she has got Sally down as a guarantor as bad as it is because she thought she could pay it off so she’s not taking responsibility for her actions.

But Gina is not a malicious person, is she?

It never is malicious. She just gets herself in these scrapes and she gets over excited. We’ve seen her try to get jobs - she's not lazy and she didn't ever think she was going to lose her job at the factory. It’s unfortunate circumstances and she's just trying to cope.

What’s Gina’s first thoughts when Sally rails at her?

Gina tries to argue but then it hits home how she has messed up. She adores Sally and she can see that she has done this at the worst possible time.

So Gina pours her heart out to Dev?

It's amazing that Dev asks her to move in but he can see she was trying to do the right thing and that is truthful. She thinks she is coping very well with her bipolar and she doesn't want that to overshadow their relationship because she actually does really like him and the feeling is mutual.

What happens when the article appears in the Gazette about Gina’s bipolar?

Gina really does not want anyone to know about the bipolar because in the past people have just run a mile when they've found out.  She's on the up so, when this happens, it absolutely floors her that her secret is out.

How would Gina feel if Dev lets her go?

She would expect it, she would take it and she would be understanding of that. She is very prepared to walk away because she has been in situations like this where it has destroyed people around her and she doesn't want that to happen to Dev. She does not for one second expect him to stand by her.

What would you like to see happen with her working on the Christmas stall?

I would like things to go very well for her because she has always been good at sewing but she's not had a business brain, she thinks too big and she's not practical. But for her to be told that she is good at something is a revelation really.

Do you think Dev and Gina are a good match?

I think they are a brilliant pair because he is very liberal, open minded and he loves her energy. The pluses are very high with Gina and she is trying. Everything is in technicolour with her.

What’s the best thing about working with Jimmi Harkishin?

I love it! He’s made me brave which is very exciting for an actor. We've played off each other and I have known him over the years. I trust him implicitly and so within that, he is willing to play which is fantastic. I’ve lucked out with Sally Dynevor and Jimmi Harkishin who are incredible passionate about acting and the scenes we do.