Victoria Ekanoye: Angie and Mary, the mother-in-law from hell 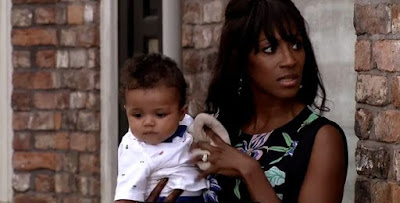 
Angie and Jude go house hunting, are they looking for a permanent move in Weatherfield?

They might be! At the moment they are staying with Norris and it’s a little bit cramped as you can imagine! And also, in the back of Angie’s mind, she wants to get her own place because at Norris’s, Mary can turn up at any time, unannounced, whereas she would have to ask if she wanted to come round to their own place.

How hard has it been for Angie having to share Jude and George with Mary?

Angie wants George to have his grandma around and for Jude to have his mum and for that all to be quite harmonious but it is also her first baby and she is missing out on all these important moments because Mary is constantly interrupting, in the way or taking over. It’s causing a rift between Jude and Angie because it's Jude’s mum but Angie feels like he has only just met this woman and Jude’s loyalty and priority should be with her and George.

What happens when Angie and Jude get to the hospital?

The baby is really sick and even the professionals don't know at this point what’s wrong. Mary is the common denominator - every time he is with her he gets sick. Someone looking from the outside in would deduce that she is the catalyst so that Angie thinks this isn’t really that far fetched. Also, the fact that she has moved away from her amazing life in South Africa makes her even more keen for it to be Mary’s fault because then maybe she will get her old life, her son and her husband back.

What’s Angie’s reaction when the doctor tells her and Jude that George often flares up whenever he spends time with Mary?

Angie feels justified in what she has been feeling. This has caused a rift between Jude and Angie so now she has a professional telling her that this is weird she thinks, “I am not going crazy, I told you,” hoping that Jude will understand and agree.

This causes Jude and Angie to row about Mary, what happens next?

As far as they know, Mary isn’t even around. The baby is being looked after in the baby room and they are arguing because as much as Jude probably does see the logic to Angie’s reasoning, it is still his mum. They are arguing so much and suddenly the alarm goes off and they realise that it’s the baby room. They run over and there are all these doctors rushing in to try and help the baby and Mary comes out.

When Mary is ushered out whilst the doctors tend to George, what’s Angie’s first thoughts?

‘Get away from my child!’ She has a lioness approach to it; primitive, very visceral. She is so angry. Something Mary is doing is hurting her baby and even in hospital he is not safe from her.

What do Jude and Angie decide to do?

Whatever it is, Mary is the danger so Angie wants to eliminate her from her baby’s life because what is paramount is George's health.

What’s the best thing about working with Patti Clare?

Patti makes my job really easy. She makes me hope that my mother in law is not like Mary which is brilliant! But I would be so privileged to have a mother in law like Patti. She’s very funny and smart, she’s got a really good energy. She’s a good egg.

What reaction have viewers had about Angie so far?

There’s been a mix actually which I was surprised about because I just assumed that, because Mary is such a well loved character and Patti is such a brilliant actress, everyone is going to hate Angie from the off. I get it though; it’s in the spirit of the show and if it starts conversation that means people care.  Every now and again people are picking up that there is something going on with Angie, they can’t put their finger on it yet but it’s nice. People think it’s great to have a new dimension to Mary’s storyline.