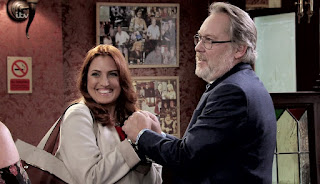 Ostrich Award: Robert always was good at burying his head in the sands of a casino when things got rough. Now he's lost a bucketload of money.

Inspector Clouseau award: Gemma has made a poster for the shop windows to try to find Henry!

Blast from the past: The bistro still has enough olives to cater 100 Greek funerals!

Lines of the Week:
Norris "Don't apologize. She stole my blood!" Moira "And now you're baying for mine!"
Norris to Colin "Your cup is always half full whereas mine is half empty and invariably chipped"
Moira "I am undone by Cupid!"
Sally to Gina "What did they do? Dangle a chequebook or was it 30 pieces of silver?"
Dev "You have so much to offer, it feels like you've never had a break" Gina "Well...That's how the mop flops, eh?"
Mary to Jude "You're a traveler, a free spirit. You're idea of 'not far' might be Belgium"
Jude to Mary "Stop being such a drama queen. That's Norris's job!"
Tracy "Kirk! You're a genius! And that is a sentence I never thought I'd hear myself say"
Tracy "I'd hate being a zombie. Too much walking" Mary "You'd be eating brains and you're worried about too much walking?"