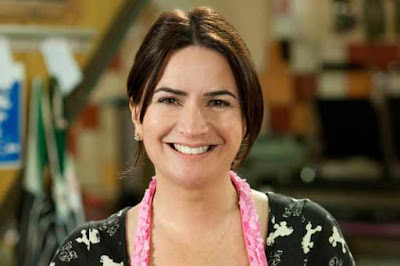 (This post was originally posted by Ruth Owen on the Coronation Street Blog in December 2017, reposted to this blog with permission.)


I had the pleasure of recently meeting and interviewing Debbie Rush, who plays Anna Windass in Coronation Street.

Debbie first of all gave away a few details first about her upcoming storyline in which she becomes ensnared in Phelan’s web. She collapses and is taken to hospital. Kevin visits her there, and adds to her woes by telling her that it is over between them and that he must prioritise Jack. Anna is devastated and it feels to her as if her support system is slipping away. She’s preparing to return to prison when she spots an overcoat. She puts it on and furtively heads towards an open door. Anna goes on the run.

Then, Tim tells Faye about her mum’s escape and it is now that Faye sees the gleeful expression on Phelan’s face. She then confronts him about what really happened between him and Anna. Faye is now finally convinced that Phelan is a liar and tells Seb that Phelan is a liar and that Anna did not push the ladder. However, Seb doesn’t believe her and as a result, Faye dumps him. At the same time, Anna cowers in a deserted building – terrified and alone. When in prison she can’t get anyone to believe what Phelan has done.

Debbie Rush tells us that many people come up to her to express their loathing of Pat Phelan from old ladies to teenage boys, showing how unanimously, Phelan is loathed. Naturally there would be a sense of justice if it was Anna who finally brought Phelan down, but there was no confirmation nor denial of this.

Debbie said that she had found the whole experience of acting out the scenes with Phelan exhausting, but even more so she has found it exhilarating. She is, she says, someone who throws herself into her acting and so does Connor McIntyre, so it’s great to play the cat and mouse game with someone who is just as keen as she is to get it all absolutely right.

When Phelan left the cobbles the first time, Anna was well aware that there existed unfinished business between them. Since then, their dislike of each other has been bubbling under the surface and for a while they stayed out of each other’s way.

In other storylines, Debbie told us that when Owen left, Anna was devastated – he was the love of her life. Then, of course, Anna was badly burnt and her legs were in a terrible state. She felt ugly and undesirable, which got in the way of Kevin and Anna’s relationship, as well as affecting her confidence generally.

Debbie spoke passionately about the rape of Anna by Phelan. She is keen to put over her belief that Phelan raped her and that she was abused and that therefore her story is on a par with the Bethany grooming story, in that both were coerced against their will.

After Debbie and Connor have finished a scene, Debbie said that they always have a cuddle, which is a relief from the dark areas into with both actors must travel. Debbie spoke of how the two of them arrive on set in a jovial mood. Then, when the time approaches for action, each actor distances themselves from each other in readiness for their role, as they transform into their respective characters. Anna admits that the dark places they go to can be terrifying.

Debbie has been on the cobbles for nine years and says it feels it’s time for a change and wants to seek work elsewhere, though she is very grateful for the fantastic storylines she’s been involved in. She’s very excited about new opening and potential opportunities. When asked if the door to the cobbles would remain open, Debbie claims that she’s not sure. She had nothing but praise too for all the people she’s worked with at Corrie and admits she’ll miss them dearly.

So Anna leaves at the end of January 2018 and wanted to make the point that she thinks the snobbery that once dogged soap operas, has now seriously diminished. I think she may be right.