Is Coronation Street stuck in the past? 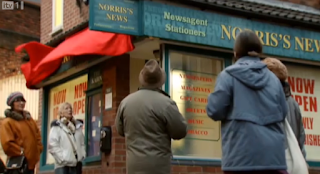 (This post was originally posted by Chewy on the Coronation Street Blog in November 2017, reposted to this blog with permission.)

One of the best things about Coronation Street, is, it pays respect to its history, sometimes characters may "forget" certain things, but it mostly stays true to its history.

The downside to this is that in the past 15 years, the show seems to have forgotten to move on as time goes by. It can sometimes seem like the show doesn't want to move with the times.

The show can sometimes tease that there is going to be a big change, such as someone wants to buy a certain shop or house on the street, something that could change the status quo, then as the weeks go by, the residents group together like the cult from The Wicker Man and throw the offender out of sight. Leaving the audience wondering what the point of the whole storyline was.

Back in 2011, when Norris reopened the old Kabin, it had a new name! At last, it felt like the tram crash had actually changed something on the street, but this was quickly changed when the residents of the street got angry about him changing the name of his own business, because Rita still works there.

Then, there is Tyrone's house, which feels like a shrine to Jack and Vera, more than it does a house, it's fine to have a small tribute to past characters in a house, but nothing has changed since the Duckworths passed away. Even more bizarrely, they teased that the house was to get a new look, when Tyrone was redecorating, only for him to make it look exactly the same.

Even now, with Underworld closed down, it feels as if, this time next year, it will be up and running again, just as it was, with (for instance) Carla telling the staff that they need to get this order done, or they'll be out on their backsides, again. Which will leave recent events feeling rather pointless, if the recent storylines were all leading to everything being back to how it was.

With new areas being added to Weatherfield, we will finally see some changes, but the street will most likely remain the same. The street wasn't always like this, until the 90s, the cobbles changed a lot over time, especially the side which Underworld now sits, which changed massively over the decades.

I feel the show needs to start perhaps laying a few things to rest, Underworld feels like it has definitely run its course, we don't really need any more storylines about dodgy clients, or missed orders, or it going bankrupt, again. Tyrone and Fiz should really make their house more like their own, and less like a museum for the Duckworths.

Finally, they need to stop storylines which seem to propose big changes, only for said storylines to not really go anywhere, and for the show to act like it is The Simpsons and reset everything to how it was before the story began. It is a continuing drama, if the storyline doesn't change anything, it can feel like the audience has been cheated.

And can Fiz get on with that forgotten career in massage therapy.

And Betty's photo still in such prominent positioning in the pub. I understand having it up but you would think enough time has past to move it behind the bar.