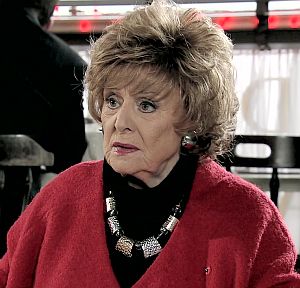 Cone of Silence award: Really? You're going to have a conversation in a cafe about your mother being raped?

Shades of Grey: Gary told Faye the truth about Phelan and Anna's history but Faye twisted it all around and now she's even more against her mother.

Guardian Angel Award: Billy seems to be taking on that role for the Barlow family, hoping to bring them together with the Christmas Spirit. He has no idea, does he?

Lines of the Week:
Ken about his family "Put them in a room together, forget about mince pies. It's more like Game of Thrones"
Rita about Gemma "The nearest she's got to Chelsea is that bun"
Todd about the Barlows "Strenge. It almost looks like they don't want to kill each other"
David to Shona "I'm the comedy genius in this relationship so could you please keep your funnies down to a minimum now that we're living together"
Shona to Sarah "So he doesn't even know you're not speaking to him! Tragic" (oh dear. )
Mary to Tracy "There was a time when Number 1 was like the set of an Agatha Christie film, everybody pointing a finger at everybody else"
David "Windass. He'd have trouble reading that menu let alone Sarah's mind"