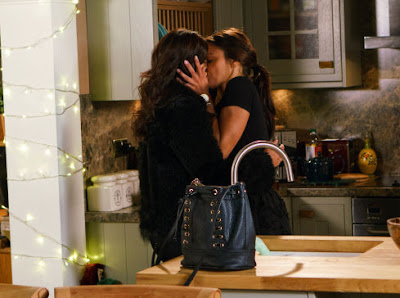 
Why does Kate tell Rana that she is moving to Spain?

Kate wants to get a reaction out of Rana so she decides that if she takes the candy away and leaves her with nothing then maybe Rana will tell her how she truly, truly feels because Rana keeps putting the ball in Kate’s court. It’s way too much pressure on Kate so this is her way of turning the tables.

How does Rana react?

Rana doesn’t bat an eyelid and it frustrates Kate even more. Kate doesn’t get the reaction that she wants and it leads Kate to think that this could ruin their relationship as well as their friendship and their friendship is the one thing that Kate wants to hold on to the most. Now they are frosty, uncomfortable and they don’t get on.

Tell us what happens when Kate breaks down to Luke

Kate finally realises her true feelings and they are so powerful. She has never felt these feelings before about anyone and the fact that it is someone that she can’t have makes it even more of a struggle. She is left with this broken heart without even having the relationship and break-up; she's broken hearted from the get-go.

How does Luke react?

Luke is the first person to see Kate vulnerable, she just breaks down. She tells him it all and to put that on Luke is awful... from an outside perspective I can’t believe Kate does that! But I am so glad that she finally has someone to talk to because she can’t even talk to her family. Poor Luke!

Weatherfield is a small place and even just seeing each other across the road it’s like, “Oh gosh,” - it’s the chemistry! There is definitely something there and it makes it really juicy that Kate can’t have Rana - forbidden fruit.

After Kate comes to terms with her feelings, Zeedan sends Rana and Kate to attend a food fair on his behalf. What happens next?

The pair drive out to the food fair in Zeedan’s van and it breaks down. They are in the middle of nowhere and for the first time ever they give each other time to talk. Rana opens up about the strict, regimented routine when she was growing up, that she can’t disappoint her family, she has to go by the book and live this happily ever after for her family’s sake. What’s really nice for Kate is that she sees Rana in a whole new light and it’s a good one, she realises that Rana has been dealing with so much. It’s now made them a lot closer on a friendship level and maybe something more…

How does Kate feel when Rana makes these revelations?

She is relieved that it’s not just her that is struggling with the feelings and in a way she is feeling optimistic. It puts a question mark over whether something could happen now.

It’s definitely racy but we did it right and in a very sophisticated, artistic sort of way which I love. It’s filmed it in a really beautiful way but at the same time it is Coronation Street and it has to have that added drama. There is that element, the fact that they are not meant to be there and they are not meant to be alone, that electrifies that scene and makes it more intense so you never know if one thing is going to lead to another.

She’s a dream. We are both from the same work ethic which is to get the job done, to do it well and to respect the LGBT community. We both want the very best out of our characters so we are giving our all and we work really well with each other.

#Kana is mental. I sit down to dinner and I can’t put my phone down because Twitter is crazy and that’s so nice because there is so much effort that goes into these episodes. When I see the viewers have got every little moment that we have tried to create it’s so nice to be recognised by them. This was a massive risk for Coronation Street and for our characters but they are mad for #Kana.

Were you surprised at the reaction from viewers?

I knew that people enjoyed certain Kate scenes with the likes of Shayne Ward, Kate’s brother, because they can see that we get on, they can see that naturally we always have a bit of banter which we bring to the screen and I love when the viewers give their opinion about what they did and didn’t like. But there is so much love for Kate and Rana that this is the beginning of something amazing.

What do you hope that this storyline will achieve?

People are growing up now who aren’t comfortable in their own skin who don’t know whether they like boys or girls and it shouldn’t be taboo. I want this relationship to develop into something that is celebrated and helps the community to be celebrated and not to be perceived to be wrong because it's not. I found a new respect and understanding in Rana’s character because this is going on all the time. I want to do the LGBT community justice because it should be celebrated, love is love.