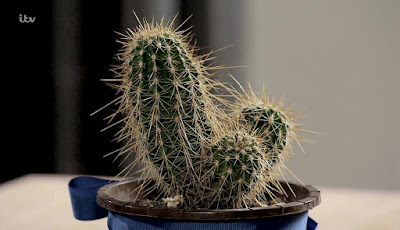 Cheeky award: Tracy's gift of a cactus for a man who has just lost a testicle was oddly appropriate, don't you think? Well, it made me laugh. And Michelle hated it. But she's never had a sense of humour.

Method Acting award: David is coaching Lily for her one line in the Nativity. She doesn't want any of it. 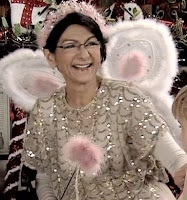 Apples and Trees award: Ruby pushed Hope off the trampoline for being mean to her. A little streak of her mother in her, perhaps?

Lines of the week:
Jenny "If there's one thing I've learned in this life, Do not throw good love after bad. And a good bra is a life changer!"
Robert "I've got a bag of salt water between me legs, don't talk to me about fun" (because, again, it's all about Michelle)
Norris "Superheroes don't need refreshment" vRita "I bet Martin Luther King never put on a pair of tights"
David "Forgive me if I'm not patting his corpse on the back and giving him the Pride of Britain"
Kirk "Me? Scared of Beth? As if!" (looks fearfully over his shoulder)
Norris "If you ask me, everybody's got some apologizing to do" (he's right) Mary "They've made a start. Now's not the time for I Told You So" (yes, yes it is)
David about Gary "He's hardly Jason Bourne"
Robert "No, I'm not an addict. I'm a disaster" (Captain Cliche in da house)
Tracy "A bit of tatty, oily rope is about all Daniel's worth"
Sarah to Gary "I thought what we had was perfect. And I was wrong. End of story."
Michelle "We can claim double that on the insurance. Should almost cover our debts" Robert "Marry me!"
Tracy to Chesney "Who's more important? Your sister or your fiancee?"

I loved the cactus!

The scenes with Lily and later Hope and Ruby were lovely. So cute seeing these little girls being given more lines. Ruby sure has become more talkative. And when did Hope change to a brunette?! Wasn't it a blonde that was playing her?