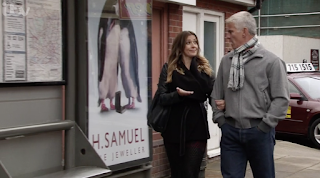 (This post was originally posted by Scott Willison on the Coronation Street Blog in December 2017, reposted to this blog with permission.)


It's called Corporate Synergy.  Dancing on Ice is making a return to ITV's screens in the new year, and what do you know, Michelle casually dropped the show's name into conversation.  Presumably this is the start of a whole raft of ITV plugs being crowbarred into the nation's favourite soap; Rita and Audrey discussing The X Factor, Tyrone talking about how one of the contestants on I'm a Celebrity looks an awful lot like his other half, and an entire episode which is just Sally and Tim watching Good Morning Britain and chatting about how insightful and witty Piers Morgan is and how everyone watching at home should also tune in. 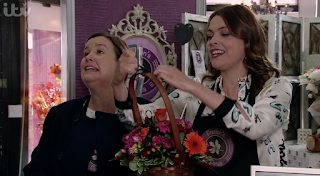 Mary and Tracy are the Elaine Paige and Barbara Dickson of the Street.  But which is which?  I couldn't possibly make that kind of judgement, but Tracy's high maintenance personality, diva attitude, sharp tongue and fondness for the odd glass of wine makes me lean towards one rather than the other.  You can decide for yourself which one I mean. 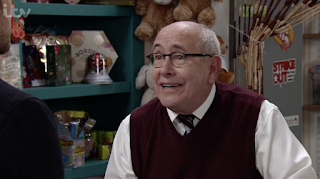 There's a computerised toilet on Balaclava Terrace.  And it charges a pound a pee.  A pound!  Outrageous.  I'm with you Norris; it's a scandal.  (Also, why do you know all about the local public toilets?  Never mind.) 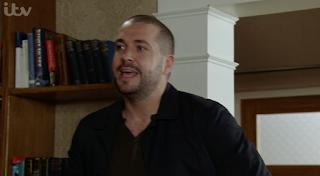 Yasmeen's taste in fiction is... surprising.  Mrs Nazir is a cultured woman; sophisticated, charming, and a former librarian too.  So the presence of a Jeffrey Archer novel on her bookshelf is quite a shock.  And in hardback to boot!  If there's a couple of Dan Browns stowed under her coffee table we may need to stage an intervention. 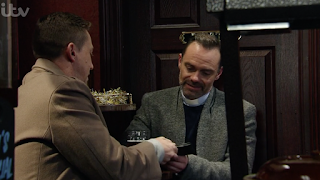 Billy continues to be the absolute worst at secret keeping.  So you find your criminal past is catching up with you.  You discover that you caused an accident years ago that resulted in the death of the driver.  And you discover that the person who died in that accident was Susan Barlow.  The absolute best place to meet your criminal pal to discuss this matter is naturally in the pub on the same street where your victim's family have lived for the best part of a century.  If they'd spoken loudly enough Ken could've actually heard them chatting about his daughter's death through his living room wall.  Well played, Billy, well played.

If you've been affected by the issues raised in this week's Coronation Street - perhaps you accidentally killed the mother of your lover's business partner, or you've been unfairly accused of murder on the flimsiest of evidence, or social services think you're a marauding she-beast despite a lack of any proof whatsoever - feel free to contact me on Twitter @merseytart.

We also learned this week that another story line is in the works for Michelle . Enough already . Almost 12 painful excruciating years of Michelle , when so many underused good characters like Erica have been lost and eliminated or are waititing in the sidelines for good stories .
You have to wonder why .
And so many unfinished story lines . What happened to Fiz's massage therapy career now that she is unemployed .