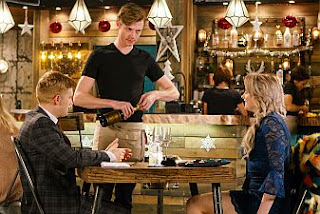 Without further ado here is a brief sneak preview of what you'll see on Corrie in Canada over Christmas week and the first week of the New Year.

Remember, Coronation Street is not airing on December 25 but there will be two hours of Corrie on Boxing Day to catch up. 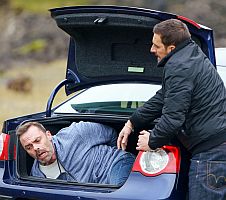 Anna escapes. Will the police track her down? Rana's brother visits with news of his own. Chesney proposes and then ups his scheming against Daniel. Fiz gets some bad news and has to leave town for awhile. Eva plays matchmaker for Leanne and Billy plays matchmaker for Adam and Eva. Aidan wants to buy the factory but needs help and reaches out to a familiar face. The Rovers get more guests than they bargained for. Tracy and Steve have a surprising encounter. Todd goes missing with Summer. Peter supports Billy in court until Billy admits later that he feels responsible for Peter's sister's death. Peter takes revenge on Billy at Christmas. Brian's return from his walking holiday isn't as smooth as he'd hoped for. The Connors have a visitor for Christmas.

For these and more detail, see the Moosejaw Mercury on Corrie.net