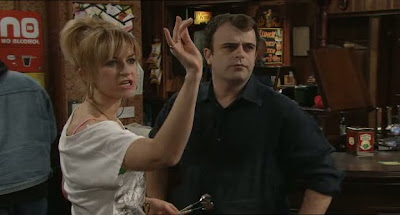 Shine is off the apple award: Dull Star: Sally does not seem to be loved up with Jeff after a romantic holiday. I don't think the Mona Lisa is to Sally's taste.

Fashion Don't award: It may be trendy but that t-shirt of Tommy's is annoying me.

Reality check award: Gold Star: Kevin is finally having a few regrets for real. Look where it's got him.
Silver Star: Amy making herself sick still doesn't seem to have brought about a truce between Steve and Tracy. Tracy's solution is to take Amy away from her father altogether!

Pushing the envelope award: Gold Star: David is going to push until the ugly truth comes out.

Your worst nightmare come true award: They're digging up the factory floor so John got straight in there on the job and uncovered the dead and decaying body. And Fiz found him!

Blackmailing Manipulating Abusing Control Freak In Spades: John really twisted Fiz and put her in the worst place possible, forcing her to help hide the body and coercing her into leaving. 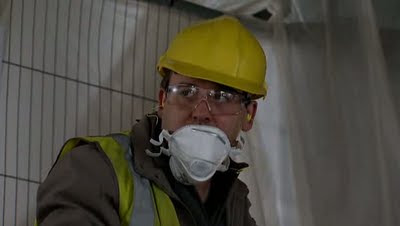 Selective Sight award: Blinders star: Owen was so worried about health and safety that he didn't want to leave John in the factory working on his own and said exactly nothing when Fiz stood there talking to John without a stitch of safety gear on.

What money problems? award: Brass star: I know why Steve was in the casino, but why was Dev there, on his own as well! He's just as broke, isn't he?

The whole truth award: Shaky star: Or almost the whole truth. Fiz didn't tell the cops about the fraud but you know darn well it will come out and make it look even worse. How could you like to the lovely D.C. Redfearn!?

Lines of the week:
John "I've been thinking...." (The start of a new plan to disappear and more lies, very, very big and wild ones)
Claudia "Don't hate me cause you ain't me, Aud. I'd like to say it's been nice but i've never been a very good liar"
Tracy "Why do I always have to be the bad cop?" (How can I count the ways)
Eileen "Who goes to Paris for a dirty weekend and spends the whole time in the Louvre? It wouldn't be the Mona Lisa, it would be the Moaning Eileen!"
Tracy to Sylvia "Before you turned out to be real, the rumour was Roy'd been raised by wolves"
Xin "Pretend is a dangerous game"
Faye "Anything goes wrong, blame me!" (because it's usually you that causes the trouble)
Kevin "You can't pull the wool over my eyes" (Yes you can!)
John "Why does everyone have to keep asking me questions?!" (Um.. liar? Doolally?)
John "Charlotte was nuts. She was every variety of nut that ever existed; half woman, half pistacio." (You should talk!)
Dev "You're saying Tracy is calling all the shots? Who handed her the gun?" (Point to Dev)
Fiz "This isn't GCSE coursework, we're disposing of a corpse!"
Graeme "I'm just a slow starter in the morning"
Becky "First time i can think of the future without worrying about Social Services" (Phrase of Doom, anyone?)
John to Fiz "You're a loose canon sometimes!" (her? HER??)
Posted by Tvor at 12:59