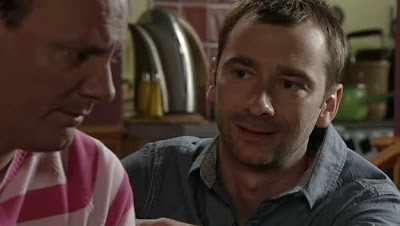 (This post was originally posted by me on the Coronation Street Blog in June 2011.)

There's a nice interview in the Mirror today with Charlie Condou who plays Marcus Dent on Coronation Street. Marcus has returned to our screens and I'm very chuffed that he's back. He's reunited with his ex, Sean Tully and Sean has had to take on caring for his son with Violet, Dylan, while Violet recovers from a car accident injury.

Marcus is fully supportive of Sean and is more than willing to help and his portrayer, Charlie, can relate. Off the screen, Charlie is in a very similar situation, co-parenting a toddler with his long time partner Cameron Laux. Charlie and a very good friend decided to have a baby via IVF and he and Cameron do their part in bringing their little girl up. In the interview, he relates that same sex parenting is getting more and more comming, and the high profiles of some celebrity gay parents is really bringing the issue to the forefront.

He says “It’s a great thing to have on TV, ­especially with a soap like Coronation Street which ­reaches so many people.” and finishes with “It’s the best thing I ever did. I don’t think you ever know love like it until you have children.”

It looks like Sean will have Dylan on board for a few months, so we should be seeing all the ups and downs of the couple suddenly taking on parenthood. I reckon they should rent that flat that Jason and Tina still own that seems to have been forgotten since the Kabin was rebuilt around it.
Posted by Tvor at 07:36