Hayley's secret is out 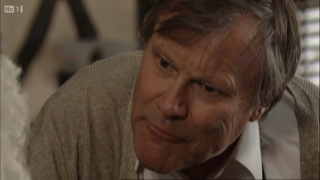 (This post was originally posted by David on the Coronation Street Blog in June 2011.)

Amidst the nonsense with Becky wreaking more havoc and Antony Cotton's "acting" like a concerned father during last night's visit to the street was Roy and Haley and their attempts to conceal the truth about Hayley from Sylvia.

The truth about Hayley's past coming out to Sylvia was something I was both looking forward to and apprehensive about because Roy and Haley are one of my favourite couples on the cobbles.

When Sylvia eventually started to attack poor Hayley, Roy stepped up in one of those rare moments where Roy well and truly stands up not only for himself but his wife as well. I don't think we've seen this side of Roy since all that business with Tony Gordon last year. But as a man who rarely divulges his feelings with others it is always a treat when we see a more vulnerable side to Roy, reminding us that he does actually have feelings and his often unspoken love for Hayley is something that he will not allow to come under attack by anyone, not even his mother.

That said Sylvia's insults were horrific but as we know she's not the nicest of old ladies, something which I hope will be explored in the future. I don't see Sylvia coming around any time soon but a reconciliation is bound to happen although when it does I hope that it is done so in a way where we come to know more about Sylvia and perhaps get an insight into why she is the way she is.

They may be one of the more unconventional couples in soapland but Roy and Hayley are also one of the strongest and I applaud the writers for going where they did because the Croppers really stole the show last night.
Posted by Tvor at 07:44