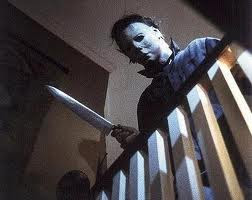 (This post was originally posted by Fat Brenda on the Coronation Street Blog in May, 2011.)

There's someone on't loose loveys, they must not be approached as they are extremely dangerous and will do owt to protect 'emselves - they'd even use violence... But that's enough about Becky McDonald for now loveys! Oh, I almost forgot, John Stape's somewhere out there an' all, bless him, but to be honest, I'm more frightened of Becky!

Poor Fiz, as if she's not had enough to put up with, she's been charged with murder and flamin' fraud! I tell you what, I bet she regrets giving that cash to charity. If I'd nicked that much I'd have bought meself so many packets of ciggies and bottles of gin me living room would look like a Bargain Booze! At least she got bail, it's no comfort though, not when the only thing you've got to look forward to is spending loads of time with Maria round yer house followed by a lengthy jail term! I'd prefer jail if I'm honest loveys, she gets on me wick that Maria!
It's nice to see Dev and Sunita's kids have woken up from their winter hibernation. Just in time to see their lovely great aunts an' all! They're a right pair them two old gals aren't they, a reminder of why it's best to put elderly relatives in a home.
Xin ordered a taxi and then didn't even get in it, I hate it when folk do that! She spent ages on the phone trying to spell her name to me an' all. Like I'm daft!
"Yes Xin love," I was saying to her, "Piccadilly it is. I'll get it booked for you."
"My name? It's Xin, would you like me to spell it?" she asked.
"No. I didn't ask yer name, Xin love. It won't be necessary lovey, I'll get it booked for you." I said to her.
"It's Chinese," Xin said, "it's like Sheen: S. H. E. E..."
"Look lovey, I flamin' know yer name and I flamin' know you! We've spoken! I do know how to flamin' spell it!"
She didn't pay the driver who waited outside the flat either! That is just cruel! Ten minutes he waited!
Social Services are a bit weird in Weatherfield, loveys. They took our Max when he wasn't in any danger (apart from the life threatening bone-crushing hugs Becky gave him every ten seconds) but when the police arrested Fiz, they didn't even turn up to see that Hope was looked after.
Talking of Hope, I've thought of a belting solution to everyone's problems. Fiz could sell Hope to Steve and Becky if she gets sent down! That way, Hope will be brought up in a loving home (if Becky and Steve get back together) and Fiz will have a bit of a nest egg when she finally gets out of the nick! I suggested it to Becky but her response wasn't very enthusiastic... she hit me loveys, she hit me with the first thing she could grab from the back of Owen's van... fortunately it was just his cheese and pickle sandwiches so it didn't hurt too much. If only she'd grabbed that when she attacked Ken and Deirdre's house! I'd like to see her smash her way through a door with medium sliced white bread and a Kraft Cheese Slice!
Steve told me Becky spat in his face! That is flamin' disgusting and Becky's spit is over 50% proof an' all. If Steve would have got behind the wheel of his car he'd have been over twice the legal limit after a face-full of that!
Not that the Weatherfield Constabulary would catch up with drunk drivers loveys, they're flamin' useless! They didn't even find John and he was in the loft! Let's be honest, loveys, there's not much to search in them terraced houses, is it too much trouble to stick yer head in the rafters? To top off their week of incompetence they left Fiz and Hope without any protection at their house and then left Fiz on her own in't hospital with her crackers husband stalking the area like that Michael Myers from Halloween! Add to that the fact that they didn't actually catch up with John who was dressed as a doctor with blood pouring from his head, limping away from Weatherfield General after falling from a building and getting back up... just like that Michael Myers from Halloween again - the similarities are uncanny!
"All I wanted to do was teach... and kidnap folk... maybe kill 'em... sort of..!"
Remember loveys, there are some folk put on this earth who make us happy, who you can love and settle down with... or there are them that appear to be belting but are in reality, fraudulent, murdering, calculating, compulsive liars with deep rooted issues and bodies buried all over the place... Make sure you choose the right one loveys! Bye.
Tweeter here!
Posted by Tvor at 20:18