It boggles my mind how Fiz could still love John after all he's put her through. So where is John? Why he's taken the inheritance out of the bank and tried to shove it all in the letter box for Charlotte's parents. It's the only retribution he can think of but he's obviously not thinking clearly. Fiz to the rescue. He keeps saying he's going to tell her everything but he never does. He avoided her, went for a nap and that gave him time to think of new lies about why he feels so guilty. He at least was able to inject a bit of truth, about Charlotte's obsession with him. So now, do they keep the money or not? Fiz thinks they should give it to a charity. Not a bad idea. 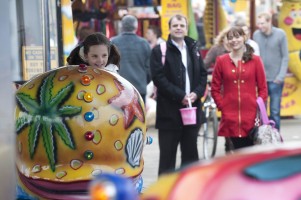 Tracy is such a cow, I just can't get over how mean she is to her kid, let alone Steve. Not letting Steve give her an Easter Egg and then after the fact, wouldn't allow it then either. Can i just say right now how much i really hate this character? I think Frank is rapidly tiring of Tracy using him to score points off Steve. I do agree she's justified in being ticked at Steve for trying to take Amy but her method is to do whatever she can for revenge. She even blackmailed Steve into taking her and Amy to Blackpool when she knew he was supposed to go to Alton Towers with Becky and Max. Steve made the fakest pretend phone call ever. I can't believe Becky didn't see right through that. 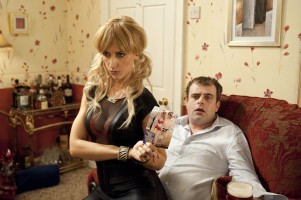 Then in Blackpool Tracy made sure to be on her best behaviour. Amy also went missing and I thought we'd be in for a repeat of Simon running off but she didn't get far. I would almost have bet Tracy was behind Steve's car being clamped and stolen just so she could get them all in a hotel room overnight and considering the thousands of hotels and guest houses in Blackpool, how likely was it that they couldn't find two empty rooms and had to share, even on bank holiday weekend? (Did you see Steve's finger gesture towards Tracy when he was adjusting his sunglasses? I'm sure he flipped her the bird!) Naturally Tracy made sure Becky found out about the little trip, especially since it ended up being an overnighter and I am more and more convinced that she arranged the car clamping. Becky really is going off the rails though, over Tracy. More than usual.

David is starting to get ideas about Kylie getting Max to come back with them. Kylie isn't going to want all that business coming out. Sure, Becky and Steve paid her for the lad but she *sold* him to them. Blame is equally shared on that one.

Wine tasting for snobs? Why one earth *would* Gail even think about hanging around in the restaurant dressed in her cleaner outfit during a party? Maria's back in the fold at at the salon and Kylie and David have picked up where they left off, treating her like dirt.

Eddie feels pushed out and he feels over his head with all this. Anna chose Faye because Faye needs her and Eddie doesn't really. And if he can't be supportive, she probably feels he wouldn't be much use if he stayed anyway. And so we lose Eddie Windass. He really grew on me over the time he was on the show and the actor, Steve Huison, really put a wonderful spin on Eddie, turning him into a classic feckless fella. He started off more Les Battersbyish but he changed somewhere along the way and was far more subtle and was less blustery and rude. The minute we found out Eddie was a master baker, the character had tons of potential and they milked it.

Anyway now Eddie's gone, Anna may lose Faye and it will all have been for nothing.

Graham and Xin seem to be rubbing along quite well. Even Kylie seems to have noticed that there's a little spark there between them. And the more Tina throws strops, the more she's going to end up pushing Graeme right to Xin. They have an inspection and because Xin went running, they were delayed and the inspector ended up in the pub. Laughed at him getting all stroppy about the monarchy

Uh oh, now Mary knows about the sham and no awards for guessing how immigration was tipped off. You'd think that she'd have kept her mouth shut to stay on Norris' good side but then, Norris wanted badly to turn them in but couldn't bring himself to. Mary has no qualms. She was hypocritical too, banging on about the Royal Wedding being a sham because the Prince is marrying a "commoner" for love and saying marraige should not be for love after braying that it should only be for the same when being critical of our young intrepid spouses. She apologized but it's a bit late. Graeme really told her some awful things but it was none of her business to interfere. Mind you, I think Xin should be turned in to the authorities for that ugly cat ornament with the squeegy. (Yet another cat for that horridly excessively cat-decorated flat!) 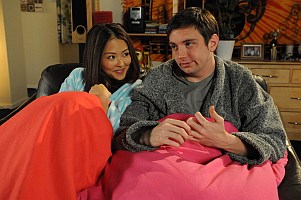 Now that they have got through the inspection, Xin is looking awfully cozy and comfy with Graeme and Tina and Graeme are both getting more and more jealous of each other. I also really believe that you wouldn't have an interview one week and a few days later, the letter about the successful visa would arrive. It still takes a lot longer than that for these things to happen. Oh well, it's not real life, is it? The end is in sight apparently. So they think. But she took a tumble off the ladder and he won't make her leave until she's well. hmmmm...Did it look to you that she seemed awfully smug when she knew she'd have to stay for awhile longer?

Oddly enough, Mary's motorhome has disappeared and reappeared. Do you think you know what might be happening here? I find it odd that Mary had to be prompted as to how to speak to the police, though. You'd think she would be well versed. I also think it's weird that they came out of the pub and didn't notice the motorhome right beside them before they turned towards the Kabin where they thought it was parked. Turns out it was Tommy playing tricks, probably in revenge for what Mary did to Graeme and Xin (called Immigration)

I thought Eileen was hired for the packing department. She's now behind a machine? What's with Lloyd's hair?? Not only is Tommy a habitual flirt, he seems to be a habitual freeloader too until Tina gave him a right gobful. Have you noticed that Chris seems to be a habitual shirtless strutter? It's almost in his character job description. Every other scene he's down to skin!

Not only is Cheryl a dull and boring character, she's now officially a cow as well. Here she was so horny to have her kid be in the school play and moped that he wasn't picked to be the lead when Simon was, and then when Sean made a great coat of many colours for Simon, she b!tched about how it wasn't fair to have it professionally made. Jealous petty cow who has no other friends besides Leanne who she's rapidly pushing away. And the Jealous petty cow is now the bar manager at the Bistro. Amazing how job experience of taxi cab dispatcher and pole dancing can give you management background. Ken and Deirdre decide that Pottery is the way to spend time together. It was hilarious! She was coming over all "Ghost" and it turned out her results weren't too bad though Ken's were far worse and he's the one that dug out all the old archaeology books for research on what type of vase to attempt, never having thrown a pot in his life. I loved Ken getting all stroppy about the "dilettante" instructor. Was it me or was Ken's jug rather sadly phallic looking? Now Deirdre's all excited and er... fired up for pottery! 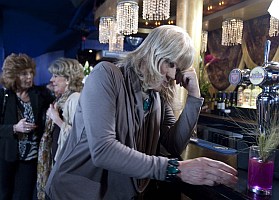 Meanwhile, Ken's grandson James has landed on the doorstep, moved in to town to help run a homeless shelter. Tracy doesn't like James, on sight.

Marc/Marcia has come back out to play and Claudia nearly saw him. I do think that his friends erred in assuming Audrey was a "he". If they really thought it was another cross dresser, they'd have referred as a "she" wouldn't they? I've got to say that Marc has the worst taste in clothes and that wig looks like a mop!
Posted by Tvor at 12:48