There's something (not quite right) about James 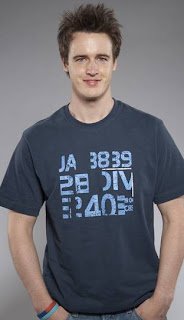 (This post was originally posted by David on the Coronation Street Blog in May, 2011.)

Okay, I’ll admit it – I actually like James Cunningham (and it's not just because his hair can rival that of Rita, Audrey and Claudia combined in the 'who's got the biggest hair' contest). I think it has something to do with how posh he is, it just makes me smile how out of place his accent is on the Street. And he works for a charity so he can't be that bad. Or can he?

It is becoming particularly obvious now poor Sophie and Sian are involved with him and the soup kitchen that there’s definitely something up with him.

It is a bit suspicious that he’d leave two teenage girls on their own to look after the kitchen (when they have only been there a couple of weeks as it is) on the day that they just happen to get robbed. I don’t buy it and I will be incredibly surprised if this isn’t revealed as some big plot to fund the halfway house that James keeps going on about.

In many ways I am happy that they are showing his darker side, but at the same time I am disappointed that they are taking the character down this route. When James first returned to the Street I was looking forward to lots of scenes between him and Ken discussing politics and the world beyond the cobbles of the street and I think they could have made a fun (if not a bit pretentious) double act. But if what has been (spoiler through the link) previously reported turns out to be true, then I doubt Ken will ever be as welcoming to James as he was this time around.


Just think, Ken and his mini-me discussing the important issues of the world while Deirdre witters on about her stuffed marrows in the background.
Posted by Tvor at 12:28