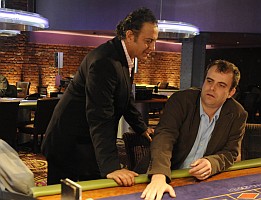 Owen finds out about Katy's pregnancy and Katy thinks Chesney has done a runner.  John has taken drastic action to cover his tracks and Charlotte's parents and Chesney are at the root of his erratic plan. Meanwhile there's a problem under the factory foundations. John finagles himself a job on the crew. Colin is uncovered and John coerces Fiz into helping him hide the body again. Will he then convince Fiz to skip town or will she find out what he's done and rescue John's victims?

Amy has health problems and Steve must rally round to be there for his little girl. But is she milking the attention a little too much? (so to speak!) Tracy decides she may move to London. Becky might be happy but Steve isn't. Has Becky pushed Steve too far?  David is pushing Kylie to go for custody of Max but Kylie as we know, has a lot of reasons why she doesn't want to. Will she have to tell David the truth or does Kylie really want Max back, too? When Social Services get involved, will Becky and Kylie's stories match up?  Becky is terrified she'll lose Max. Are here fears justified?

Sally's romantic holiday in Paris with Jeff wasn't quite what she thought it would be. After Kevin's accident, she takes pity on him and allows him to move in with baby Jack. Now that Kevin's got his feet back under the table, will he be willing to leave when he's better?

Graeme and Xin stage a breakup but is it what they really want? Graeme's guilt overwhelms him.

For more detail and photos, see the Moosejaw Mercury at Corrie.net
Posted by Tvor at 13:50