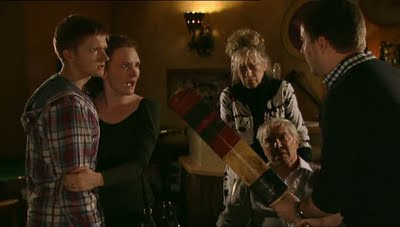 (This post was originally posted by me on the Coronation Street Blog in May, 2011.)

He's an abuser. He's an abuser as much as if he was physically violent.  He's emotionally beaten Fiz down until she thinks she's the bad one, she's no good and it's partly her fault. She was even willing to run away with him up until she discovered he'd kidnapped Chesney and the Hoyles and she heard him admit to murder. I have hated John Stape for a long time but it's reached new levels this week. How DARE he!!?

He dares because he's completely snapped. His guilt and desperation have driven him into madness. When he tried to snatch Hope from Maria, I think he felt that if he had the baby, Fiz would follow and she'd do what he wanted. And she nearly did, too!

He's put her in one impossible situation after another. She might have been naive and loyal but she didn't deserve this. I don't know what's going to happen on that hospital roof, but if I was Fiz, I'd be sorely tempted to push him off! Oh, I know, that would make me as bad as Stape but wouldn't it be a crime of passion or something? Temporary insanity?

Huge, massive, immense kudos to Graeme Hawley who has pulled out all the stops and then some and it's only half way through the week!
Posted by Tvor at 20:35