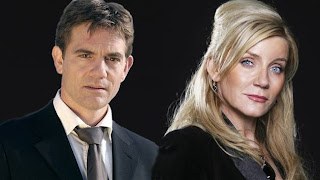 (This post was originally posted by Craig on the Coronation Street Blog in April 2011.)

As you know,  we're getting a trio of new characters to take over behind the bar of the Rovers!

Steve McDonald  employed Stella as his new bar manager, and she'll give poor Steve more than he bargained for by moving in with husband Karl and daughter Eva.

Stella will have a dark secret, like they say about a lot of new arrivals, so that's bound to come out in the first couple of months! And look out for that to have repercussions for some of the Street's residents.

Exec producer Kieran Roberts said: "Karl and Stella's fiery marriage is sure to keep viewers hooked through 2011 and beyond".

What do we think over here at the Bluenose Corrie Blog? This will certainly vastly change the dynamics of the Rovers from now on, sounds like an exciting new direction for our favourite boozer! Personally I'm a big fan on Michelle Collins, so looking forward to seeing Stella especially.

Craig and I posted about the same thing just about the same time so here's my take on ITV's "Big Announcement". this morning introduces the couple that's going to be behind the bar of the Rovers. The couple's names are Stella and Karl and Steve hires Stella as the new manager. She and her husband, Karl, and their daughter move in. Seems they have a "fiery" relationship and Stella's got a "dark" secret that's going to "rock the cobbles".

I'm dubious. I don't really want to see Southerners behind the bar so I'm hoping they can both pull a Jessie Wallace and put on a credible Northern accent. There have been a lot of accusations from commenters here lately that Phil Collinson is making Corrie too much like Eastenders with grim storylines and this may backlash even further. Coronation Street is a soap that reflects Northern life and it's people and it shouldn't end up being a clone of Eastenders.

I'm willing to wait and see, and willing to give them a chance, but they've got pretty big shoes to fill and high expectations to meet.

Edited to add a few comments streaming from the ITV Twitter page with quotes from Collins and Michie:

>>Michelle Collins: “I am honoured to be joining.. it's been part of my life since I was a child.. it is extremely exciting.” #Corriebignews
Posted by Tvor at 09:06