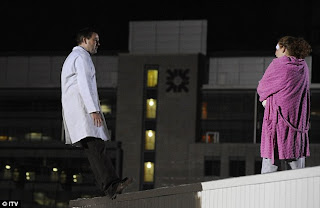 (This post was originally posted by IamSimon on the Coronation Street Blog in May, 2011.)

Watching Coronation Street's 'explosive week' climax last night with my mum was a sad experience. She wouldn't stop crying when John fell to his 'death'. Moments before his fall she kept shouting at the TV; 'I know what's going to happen...I know what he's going to do...DON'T DO IT JOHN!'.

I had an idea that John would survive, so it wasn't a big shock when it was revealed that John's body was not found. My mum rejoiced, thank goodness.

It got me a little emotional to be fair, as John has been a great character, he is really, underneath all the murderousness, a nice guy. It has been sad, as well as humorous, to see his downfall.

It got me thinking of other emotional moments in Corrie. Recently Jack Duckworth's death was very emotional. I thought I was going to cry, but I didn't. I did however shed a tear...or two with the deaths of Fred Elliot, Mike Baldwin and Liam Connor.

I also remember being really upset during the Tram Crash week during the deathbed wedding of Peter and Leanne's, I honestly thought Peter was going to die. The acting of all involved in that scene was astounding.

Coronation Street does emotion well, with a few exceptions. Because, being in its 51st Year, we have grown to love and care about the characters.

Although I do not watch any other soaps, I have heard that the same can not be said for some of them. Recently a character was murdered in Hollyoaks, after only being in the show 5 minutes. That is not enough time to care about the character.
Posted by Tvor at 12:14