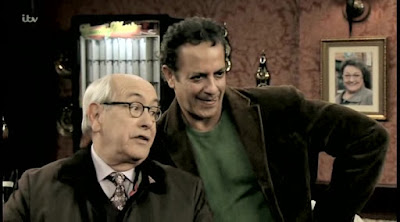 Mary had a date. Dev was bemused. Norris was not.

Pull the Other One award: Do they really think we'd believe a nearly 80 year old man would join a 20something running after a client that skipped out without paying?

Sibling rivarly award: Cathy has always felt overshadowed by Nessa who always seemed to be able to handle life with confidence and zest.

Peacekeeper award: Yasmeen may be disappointed in Alya but she's a bit more sympathetic and trying to keep peace in the family.

Practice makes imperfect award: After six weddings, Gail's gone way past the point where practice would make perfect. In her case, I think she must be in the "just don't get it" category.

Flip Flop award: Zeedan is supportive, then he's nearly calling her names and beating on Jason, and then he's supportive again. Make up your mind! (But then, I like that he's being supportive) 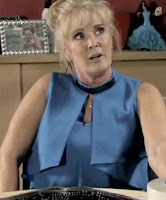 Cheeky mare award: Izzy blaming Alya because Jake was up in the night and Gary is nowhere to be seen? Really? And would she normally call Gary over in the middle of the night when that happens? Thought not. And as I recall, Gary wasn't about to get back together with Izzy anyway, she'd got the wrong end of the stick so Alya didn't actually break them up.
Fashion award: I really liked Liz's blue dress.


Location query: When Alex first visited, Cathy had to put him on a train to go back to his mother. Now Nessa is just going out for a walk and popping in to the Rovers for a drink. Either she's walking for a gold medal or the continuity gremlins are at it again.

Musical Ambiance: Crazy by Patsy Cline in the pub when Liz got back from her date with Tony. "I'm crazy for trying and crazy for crying and I'm crazy for loving you"

Fool me once award: Not sure Michelle was fooled by Liz and Erica's fancy footwork to cover up Liz's lie, the one Erica nearly blew out of the water because Liz didn't give her a heads up. 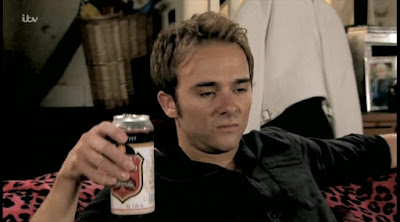 Lines of the week:
Max "If Gail got married, like, six times, does that me she's really good at it?" (David snorts) David "You'd think so, mate"
Kylie to Eva "What are you, the secretary of the David Platt fan club?"
Norris "He could be Weatherfield's Hannibal Lecter, for all we know"
Anna "Owen used to say that tiling was an art" Steve "Well then, say hello to Leonardo da Vinci!"
Sophie "Dad, we've got an empire to build"
Tony "I'm on a break" Michelle "From what? Your personality?"
Brendan "Ghosts don't judge, Mary, and neither should we!"
Nessa "It's always nice to have a dunk in the afternoon, d'you know what I'm sayin' Ken?" (HA! brilliant line, superbly delivered!)
Cathy about Nessa "When it comes to men, she's like a heat seeking missile"
Nessa "Inside this ample chest beats a passionate heart"
Rita "Sometimes, today is all we've got" (indeed)