Our friends at the Coronation Street fan podcast Conversation Street do a sterling job week in, week out.  They bring fans a round-up of events from the cobbles each week with their own unique take on what's been going on in Weatherfield. 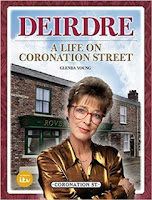 In this week's podcast they include an interview with yours truly about the Deirdre Barlow tribute book which has been released this week.  It's now available in all good book shops and online.

Unaccustomed as I am at public speaking, I think I sound as nervous as I felt in the podcast!  But if you'd like to listen to my interview on this week's podcast, I come in around the 61 minute mark at the podcast here.

I have also been interviewed for BBC Radio Newcastle about the Deirdre book and the interview will go live this week. As soon as I know when it's going live I will let fans know. I'll be on the Anna Foster chat show which runs each weekday from 10am to 12 noon.

I'll also be appearing - gulp, live - as the "After 2 guest" on the John Foster show on BBC Radio Tees on Friday 30th October at 2pm.  I'll be talking all things Coronation Street and about the Deirdre book with John, who is also a huge Corrie fan. He'll be playing my top 5 favourite records too.