Kylie can't face partying in Gail's new room over Callum's resting place. Can't blame her. Gail is oblivious of course but David is trying hard to convince Kylie to go to her grand opening party. Kylie's getting paranoid, too, thinking she can smell the decay. Kylie blames David for the situation but what's the solution? Gail overheard him telling her that she'd be in jail but she didn't overhear much and David scrambled for an excuse and dropped Kylie right back in it.

That was a terrible thing for him to say and she's really shocked at how low he's gone to cover everything up. He's only being stone-cold to try to keep everything in control. He's pretending to make her appointments with the councillor which has the result of getting her the afternoon off, at least.

Wasn't it nice to see the silence for Remembrence Day in the cafe? Tracy reckons Steve has to pay for a broken violin bow. He's already paying for the lessons, Ken bought the violin, I think Tracy could manage a few pounds for the bow. But that's Tracy for you. Jamie is still bullying Luke into racing, I see. Sophie's already dressing smarter now she's a business owner. 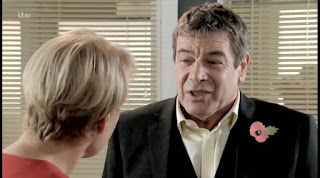 Tim and Sally are back! That was a bloody long honeymoon! They got married October 5. She's back to work and even though she was perfectly pleasant to Johnny, he immediately found her voice grating. Thing is, Sally is a good PA but she's also a good machinist but Carla isn't letting Johnny off the hook. He wants her demoted, he has to do the demoting and he did find a way of doing it so that he tried to blame Aidan and Carla, tried to praise her skills, but he admitted it was her voice in the end. and he managed to flatter her, praising her skill as a machinist and making her floor supervisor on Carla's suggestion and he really poured on the honey, didn't he? She's not stupid, though, she managed a promotion out of it.

Funny they have had that position in the past but haven't always. Last one was Hayley. And I can't blame Sally for being miffed and wondering if she should go to a tribunal. Demoting someone because you don't like the sound of their voice has to be grounds for something.

Dev was showing off with the pricing gun and wearing his second best shirt, dressed to impress but with Mary and Cathy taking the mick, it was a hard slog. But his showing off ended up coming across more patronizing. At least Erica doesn't let him get away with it. Eileen reckons Dev fancies Erica but it doesn't seem like that's returned. At the moment. And after another crisis at home, Erica is now homeless so naturally, Dev has offered her the shop flat.

Amy is still forging ahead on the violin lessons. Ken is avoiding taking her even though the whole thing was his idea because he wanted to go out with Nessa.

Steve has decided he had to get out of dodge, what with Tony lurking around. His nerves couldn't handle it and he's off to Spain while the actor is off taking some sick time. Liz is still insisting she's not getting back with Tony and then brings lunch over to him. He's pouring on all the charm he's got and then some. It looked like that charm might be winning her over but she still wants to keep things secret. She is determined to keep Tony away. She might still have feelings but she can't put her family through it all again. He's got a big job to win Steve around. Was there a little smirk on her face as she went down the steps after telling him? I think there was. 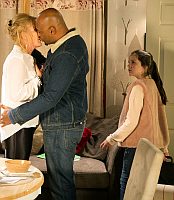 Amy saw them kissing. I don't expect it will stay secret long. I loved it when Amy questioned Michelle and Liz as to the lay of the land regarding Tony's welcome or not. She had a very conniving look on her face. Tracy saw Tony smile at Liz though Liz blanked him on the street and now she's suspicious, too. By the end of the week, Amy spilled the beans and the beans hit the fan and then asked Tony for some money for that outfit she wanted, which made me laugh out loud.

All week we had Liz and Tony skulking around behind people's backs with Liz now pushing Tony. He's got to cut ties with Tracy. He's got to make it up with Steve. It sounds very much like she's got an ulterior agenda and Tony's falling right into her web, especially when she casually mentioned that he'd have to sign the pub back to Steve as the only thing that would make any difference to her son. Not that she said he had to but it would probably be very awkward living under the same roof, wouldn't it? The seed was sown.

Now Tony wants out of his partnership with Tracy and she hasn't got the money and neither does Robert but she's jumped to the conclusion that Liz is behind it. Which she is. But after Liz lied and denied, Michelle looked thoughtful. Tony cleaned out the bank account in lieu of the payout he wanted from her to buy him out. I hope Tracy gets a contract sorted out so that his name isn't on the business anymore, after that. 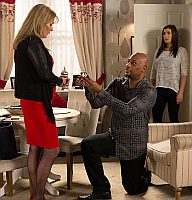 Finally, Liz is confronted by her friends, Erica, Eileen and Michelle, all of whom just can't get their heads around Liz taking Tony back. Erica stays more or less non-judgemental but Michelle and Eileen use as much ammunition as they can. It doesn't seem to make a dent, even trying to use guilt over Steve's reaction. She says something about having to do what she has to do with is a bit odd. You'd think she'd declare that she has to follow her heart. When Tony comes to her with a signed contract that gives her and Steve back the pub, Liz verfies it with her solicitor. So far so good. She texts Michelle to come back to the pub but she's side tracked by Tony who slips in and goes down on one knee to propose just as Michelle comes through the door, and she's horrified!

Nessa really is over the moon about Ken and making it sound like it definitely is a developing relationship and rubbing it in gleefully to al that will listen. But according to Ken, yes, he admits taking her out and Tracy is horrified. She's certain it means he never loved Deirdre at all, and to some people it can look like that but really, it's not all that unusual. It's difficult to see someone moving on when you might not think it's been an appropriate length of time but it's different for everyone. I still fully believe that in Ken's case, it has more to do with being lonely, needing someone to fill that spot but he likely wouldn't have taken that step if Nessa hadn't been so relentless in pursuing him, either. 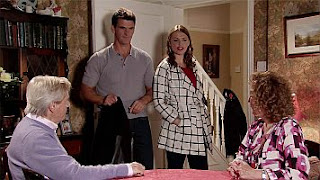 But Tracy's outburst and Deirdre's old friends did make Ken think twice about it. He can't be happy about a relationship if everyone else is against it. Robert's encouraging Ken but I'm not sure it's fair, because he's also not been in that situation. Ken realizes it looks like he's back into "ladies' man" mode. I can fully understand how it hurts Tracy to see her mother replaced. I think it might have gone over a bit better if it had been Audrey rather than man eater Nessa. He's decided. He's going to date Nessa and keep on living. Her revamping his wardrobe, though, even getting him into jeans, might backfire on him! Mind you, he turned vegetarian at his late age so maybe jeans are the way to go!

Tracy isn't happy about it one little bit.

Simon's back and nothing's changed. He's still angry and surly. I'm tired of this. If there hadn't been a break in the action, I would have stayed interested. It certainly didn't start off well for Simon. First Peter made him take the train on his own and then Leanne didn't meet him at the station. He was nice when there was company around but once Ken and Eva left, it was back to Simon angry because Leanne sent him away. It didn't help because Peter spent more time with his girlfriend than with him. 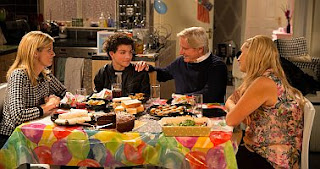 So we're back to the same old same old. I liked this story at first, it was interesting and inevitable considering what Simon has been through all his life. Now, after a break, it feels like it's dragging on too long and I hope they wind it up sooner than later. Meanwhile, Leanne is reaching the end of her rope. The break was good for her but she's right back into the firing line. Simon mouthed off but Eva really gave him grief for it. He seemed to genuinely apologize but Leanne insisted he go to school so his attitude slipped right back. He bunked off school and had a party for his mates which Leanne discovered. Uh oh.

How can Tyrone and Fiz not decorate the neighbourhood and rally the troops to give that sweet little girl a happy Christmas. Simon was away for 8 weeks. No word of being at school while he was away. No word of Leanne getting fined for taking him out of school. No word of him doing any schoolwork. I thought Liz told Tony to come to the pub later because Michelle would be out but she was certainly not.