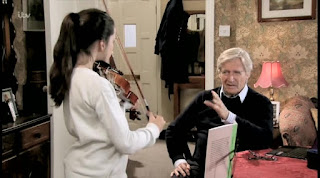 Tone Deaf award: Amy is not musical. At all. Ken might need to accept that.

Living through your grandchildren award: Ken. If Amy can't make a simple recorder sound any good, a violin is going to be cacaphony. He's just trying to live his lost dreams through her.


Sibling Rivalry: Sounds like Aidan and Kate have long been bickering siblings. 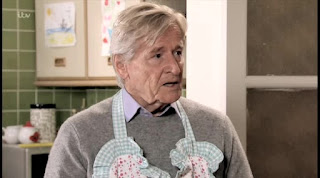 Fashion "Say what?" Ken wearing what must be one of Deirdre's old pinnies.

Pants on fire award: Luke lying to Maria about racing. And to Norris about an early breakdown call (that would by why he's towing a racing car on a trailer, then? Norris, you're slipping, it took you all day to figure it out)

Tech Savvy win/fail: Audrey seems to be well aquainted with eBay bidding but has no clue about digital radios.

Marvellous little scene about nothing: Norris and Rita talking about dreams.

Thunderbirds are Go! Kirk was a fan, so is Hope! (so is my new nephew and his son!)

Psychic award: Johnny asks Kate to call Singh's. She picked up the phone and dialed. Didn't look it up, didn't ask what it was, just knew it off by heart apparently. (Aidan had all the paperwork with him so she couldn't have seen it on the desk)

Offence is a great Defence award: Callum's mother is worried sick but David goes on the offensive, shouting the odds and throwing her out lest anyone, most likely Sarah, starts acting suspicious.

Lines of the week
Johnny "Do you employ Kirk to fill some kind of quota?"
Tracy to Robert "What a total crawler" (Is that anything like suck up?)
Luke "Hope for the best, expect the worst and take what comes" (words to live by)
Mary "I blame the Prince of Bel-Air"
Robert to Amy "Nobody's going to force you to do something you don't want to do" Amy "Have you met my mother?"
Luke to Jamie "Still landing me in trouble" Jamie "Still a nice little choirboy?"
Fiz "It's hard to remember when Carla's temper and me job was all I had to worry about"
Kirk "I got the sack because I took a couple of days off. It was a calendar factory" (Brilliant!)
Carla "I've found if you don't laugh, you'll cry. I'm too vain to smudge mascara"
Tracy "If at first you don't succeed, pack it in!"
Billy "There are some people that society is better off without" (You've got your wish)
Alya "How can I plan a wedding based on a lie?" (It's a soap. They do it all the time)
Kate "What's better, you looking the hero saving the day, getting an order, or making our dad look a right pillock?" Aidan "That's a difficult question"