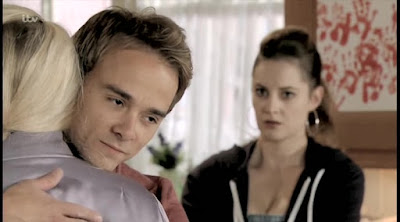 Bully Boy award: Yes, David is a bully. He's very good at it, especially when he's scared, himself. Bullied Sarah and then scared the pants off Bethany.

Are you new here? award: Sarah believed David's bullying threats. If she'd been in her right mind, she'd have known better.

Mind the Gap award: Audrey's definition of classical music and Ken differs by about 200 years, give or take a decade or three!

Odd Couple award: Anna's idea of a lovely girly night in is inviting Gary's fiancee over. And Gary's ex. Gary minds the baby and Cherylee Houston gets paid for a rare appearance.

Corrie Cupboard award: Izzy, Chesney, all the Alahans, Erica. They get dragged out of the cupboard for an appearance now and then. Use them or lose them, guys.

Supportive award: Nice to see Chesney (indeed, anyone) giving Tyrone a hug. Men need it too, you know.

High Horse award: Aidan's enjoying being the boss of his sister for a change, even if she's embarassing him. And he wasn't too happy that Carla hired Eva without asking him. He sure fell off that high horse once he saw Eva's blue eyes and all her other assets, though.

Daddy's Little Girl: Kate is clearly in her daddy's good books, probably because they're much the same type of person, I think.

Entitled award: Aadi and Asha, old enough to pack an overnight bag themselves, still reckon Mary should do it for them.

Continuity fluff: One of the cakes on Monday was apparently Sally's. But was she back from honeymoon yet? No, she was not.

Generosity award: Yasmeen and Sharif offering Gary a chunk of the gym as a wedding gift.

Lines of the week:
Michelle to Sarah "This is not a social club for you and your family"
Kylie "Is there anything you wouldn't do?" David "No." (She's new here, obviously)
Sean "HashtagJustSayin'"
Jason "What happens in lapdancing clubs, stays in lapdancing clubs" (Chesney looked jealous)
Rita about Hope "She looks happy enough now" (I think you need your eyes tested, she looked done in)
Gary "What about you and Beth? Was that love at first sight?" Kirk "No. It just grew, kinda like mold" (nice.)
Aidan "Try not to stress" Eva "Well I think that ship's sailed"
Kirk "I'm glad I'm not complicated"
Gary "Alya saw something in me that I never saw in myself" Jason "Which is..." Gary "A decent bloke" (she was right. and he's gonna crash hard when he finds out the truth)
Mary about the twins "You'd think I was asking them to dig trenches"