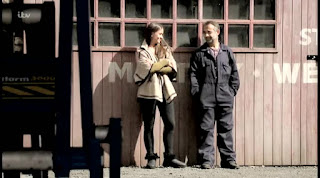 Remarkable Coincidence award: The viaduct empty space is newly up for sale just as Kevin is needing space to expand. Tyrone is a partner. Doesn't he have any say in all this? 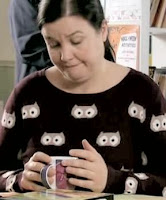 Cone of Silence award: Why is it that sometimes, characters overhear other conversations from more than 10 or 12 feet away yet sometimes, don't overhear when sitting right next to another.

Blast from the Past award: Awww Tyrone still keeps a photo of Jack and Vera

Fashion Win: I LOVED Ruby's ghost dress! I also really liked Mary's top with the owls on it

Mr. Obvious award: Ken grabbing for any excuse to hang out with Audrey. Art class?

Argument fail: Norris might be caustic about Mary's love of The Inexplicable but she rightly pointed out he reads one about ghost hunting. I think he just lost that argument.

Mary and the editor of the paranormal magazine, Brendan, get the Kindred Spirits award. (see what I did there?)

More annoyances: Audrey taking an art class. In the middle of a work day. While shorthanded with Maria away. Mary writing her novel in the middle of a busy shop. Mary getting upset that the shop won't carry her favourite magazine. Ever hear of a subscription? 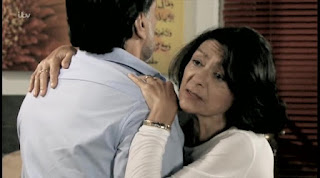 Lines of the week:
Yasmeen "Alya. What did you expect?"
Mary "Do one, Noz!"
Norris "That is like saying the Weatherfield Gazette is the foremost voice of world politics" (it isn't?)
Yasmeen "How do you want me? any position is fine. I do pilates" (You might want to rephrase that)
Sharif "C'mon Zee. Bridezilla's got her claws out"
Mary "Oh Brendan" Norris "Oh, my" Rita "It's more than his number 65 she's after"
Norris about Mary "Mary Queen of Strops"
Norris "Amy is not Mozart and you know it!"
Mary "You may mock, Norris" Norris "Oh, I intend to, thank you very much"
Dev "D'you know what you need?" Mary "Something sharp with a bevelled edge"
Roy "I admit, I can be a bit pedantic." (A bit.)