(This post was originally posted by Clinkers (David) on the Coronation Street Blog in October 2015.)

Now there probably aren't that many of us who remember the halcyon days of early 1960s Corrie when a strike robbed the programme of most of its actors. It's the stuff that legends are made of. Plucky old Granada carried on with a handful of characters, all shown huddled together in close shot. If any crowd scenes were called for then kids were dressed as postmen and Ida Barlow was played by an Action Man in a wig. Or something. Corrie carried on, regardless. 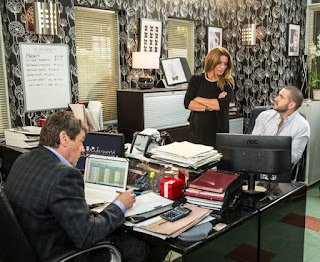 Fast forward over half a century and the show finds itself at the other end of the spectrum. Every week we seem to be bombarded with another set of clamouring new faces. The cobbles are getting dangerous. Take the Faktry. There are now almost as many managers as machinists. Into that nasty little office cram the House of Connor. If Carla whips her hair she'll take someone's eye out. Add to that Aidan's bosom bursting forth at every opportunity and old crumple-face Johnny slumped in any available chair and before long there's no room for feisty box-packer Kate and 'a coffee, two sugars love' Alya.

The need to jam folk up to the rafters seems endemic. Over at number five - and while we are there, exactly who does own that place? The council? Is it Chesney's name on the rent book? Anyway, there he resides with Sinead, Kirk, Beth and Craig. Presumably one of them is sharing a cage with the rat or is nesting in the Les Battersby memorial whirlpool.

It also seems to take a cast of thousands to pour wine and serve pasta at the Bistro. Who else has suppressed as chuckle as a character is shown to their table, all of two feet away? Never mind, here's Steph to wave a menu at you and Andy to whisk it away. Nick's hovering with the olives, Leanne's offering you one of her Munch's 'Scream' faces, craggy old Robert's tossing your salad and Gail will clean around your table as you eat. The place is a madhouse, soon to edge into meltdown status as the  many Connors arrive to be 'shown to their table'. Form an orderly queue. 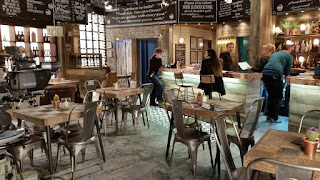 So in the last few months, Connors aside, we've been served up Cathy, Robert, Cathy's nephew, Luke's weird mate and now, if you wouldn't mind, please create a little space for Cathy's sister Nessa and Ted Robbins. Sorry guys, we don't have any rooms as such for you but if you'd just like to lift that manhole cover and budge up next to the corpse. That is, of course, if it's still there . . .