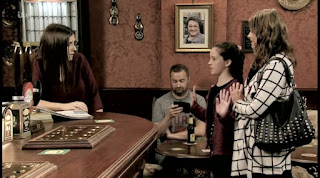 Apples off the tree award: Amy had a very conniving look on her face after assessing the situation regarding Tony. Like mother like daughter!

Musical ambience: Amy was playing the theme from the Muppets on the violin! At least it was recognizable.

Pants on Fire award: where do I start? David and Kylie pretending she's on drugs. Liz and Tony pretending they weren't dating again.

Spider's Parlour award: I think Liz is setting Tony up for a big fall. ("Come into my parlour, said the spider to the fly")

Cat out of the bag award: Amy! Very good at deciding just the right time and place to spill the beans and aim them towards the fan. Then asked Tony for money after everyone dumped all over Liz for taking him back. What a legend she is!

Fashion misstatement: Ken? Jeans? I don't think he wore them even in the 60s did he?

Blast from the Past award: Sophie mentioned Bill Webster in a round about way, using an expression her granddad used to use.

Lines of the week:
Amy about Liz and Tony "Dude, they were all over each other!" and "Well, don't shoot the messenger!" (Amy was Totally Awesome this week!)
Gail "We've lived in the shadow of Sally's conservatory for far too long"
Tracy to Nessa "You hearse-chasing old slapper"
Kylie to David "Because, unlike you, I'm not a psycho"
Ken "Tracy can bear a grudge the size of an aircraft carrier"
Tracy "Even her name sounds like a bank account"
Tony "You do know what you're looking at here, a new man" Liz "Yeah, well I might keep hold of the receipt" (I would if I were you, chuck)
Sean "Have you never heard of flattery, Sal?" (And she fell for it)
Erica "I'm not one to throw stones, not with the amount of glass houses I've lived in"
Kirk "It's a 24 hour clock so there's all that to deal with, too!"
Sophie about Luke "He's had a face like a yard of gravy all day"

I liked Jason's comment that Liz had just taken Tony's face off the dart board.