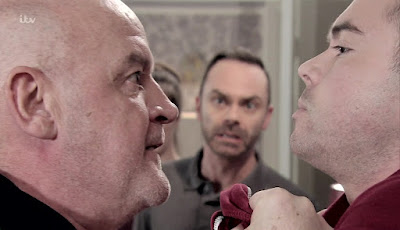 The Straw the broke the Camel's Back award: Todd pushed Pat a little too far with his jokes about the spirit world and Pat nearly took his head off! Lessons learned, Todd.

Fearsome award: I love it when Liz gets fierce and starts pointing that finger. I wouldn't mess with her.

Long Night of the Soul award: Is Pat Phelan really feeling guilty about Michael and Andy's deaths? His chat with Billy seemed to indicate this. He's ok playing tricks on other people but he sure doesn't take it well if it's on him, especially when it's rubbing against a guilty conscience.

Return of the Native: Alex is back. We've not seen hide nor hair of him since the Christmas Catastrophe wedding, have we?

Lines of the week:
Mary to Tracy "You'll get another job. You're smart, you're good with peop... You're smart."
Billy about Amy "I've got a feeling she can play a lot more than the violin" (You'd be right)
Rosie about an ex boyfriend "He was always telling people what a lovely pair I had" (and she thought it was her eyes!)
Daniel to Ken "Who else is there to blame?" (*coughKencough*)
Tracy "Luke, don't lie to me because I'm better at it than you are"
Peter "I've got me very own wrecking ball...me dad"
Sally "I'd have more time for these trolls if they could spell!"
Audrey "There's more than one member of that family that's been up on a murder charge before"