We need to talk about Sinead 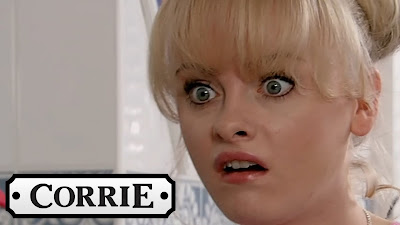 Guest blog post by by Glenn Meads who is on Twitter and LinkedIn
Fancy writing a guest blog post for us? All details here!
"Characters in soaps change, and this is a given and a good thing. Todd Grimshaw was not always a conniving so and so, and Liz did not always wear leopard print, but there has been one massive change to a character - that of Sinead.

When Miss Tinker first came to Weatherfield four years ago, she was a sweet and caring young thing; the perfect match for cheerful Chesney. Cynics might have thought ‘not for long’ as the rules of soaps is, if you are young, happy and optimistic, there may be troubles ahead.

And, sure enough – Sinead has been stuck in a relationship with ‘Chez’ until she decided to heed Donna Summer’s advice, by saying ‘Enough Is Enough’ and moving on. So, who did she decide to hook up with to mourn the loss of the guy who stinks of Doner Kebabs? Mini Ken – aka, Daniel Barlow, he with the kind of foppish hairdo that Hugh Grant was donning in Four Weddings and a Funeral.

In true Deirdre and Ken style, these two are an odd couple. One reads English Literature and the other reads Take A Break.

But, for some reason – ‘new’ Sinead’s actions have never seemed that believable. For Katie McGlynn, it is probably a god send, as it gives her plenty to get her teeth into, and Sinead was becoming so boring, that even Ken seemed interesting in comparison.

But, has the change been too rapid? Sinead has had an abortion and lied about it. She keeps getting so drunk that even Auntie Beth has said: “This isn’t you!” Too right, it’s not and is it a McGuffin? The mystery of who assaulted Ken, making him drop his Guardian crossword continues. So, is Sinead being set up as being so erratic, that we start to think “She dunnit?” Only to find out that it was Pat Phelan, after all?

I hope that the writers develop Sinead and Daniel as the off-couple, as this has worked with Deidre and Ken, and I still laugh at the bespectacled one when she shouted: “You’re boring Ken!” But, I want Sinead to do the same, as opposed to cooing over ‘Mini Ken.’

Jonathan Harvey is king of the one liners, so I would love to see him create some sparks with this young couple, through humour. As, seeing Sinead swigging leftover booze from holidays past, that she has never been on, is becoming a bit galling.

I would love Chez and Gemma to get together, then Sinead’s transformation into ‘Sue Ellen’ swigging a bottle of Soave on the Red Rec would be believable, because she would have something to fight against. Having Chesney cooing over her like one of Jack Duckworth’s pigeons isn’t working for me. And the speed in which she has fallen for 'the fop' is so fast and furious, I thought Vin Diesel was driving the script.

Sinead and Daniel - I wish you all the best, but you need time apart for this to work. I suggest a drunken holiday with Auntie Beth. And four Jaeger bombs later, if you want something more academic, then so be it. Until then, Gemma and Chez need to get it on in the stock cupboard, as that would be a match made in Corrie heaven and would create fireworks necessary to change Sinead to grenade, in an explosive and much more believable way."