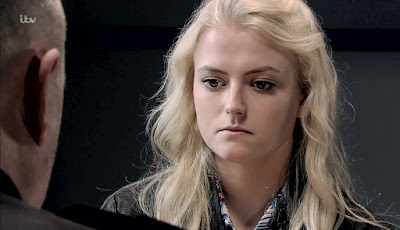 Pants on Fire award: Bethany lying to the police to give Nathan an alibi. She was so nervous she was vibrating! Chloe is lying to Peter about everything.

The Dangers of Temptation award: Peter wants to buy the Rovers. Last time he tried to open a bar, he hit the bottle, big time, and they reminded him of it, too.

Interference award: Ken really is getting his nose into everyone's business these days, isn't he? I don't blame him for worrying about Peter owning the pub though. Any parent would worry.

Manipulation Street: Ronan used Tracy as bait to lure Adam in for a beating. Chloe put a tracking device in Peter's phone.

Musical ambiance: Slave to Love playing while Peter was falling under Chloe's spell.

Hypocrite award: Toyah calling Maria a tart when she herself cheated on her husband, Toby

Maybe Not So Odd Couple: You may think Gail's idea of David and Maria as a couple is silly but don't forget, he did have quite a crush on her years back.

Lines of the week:
Mary to Adam "Can I just say, if you come anywhere near this till, I will get you in a headlock" (I believe her)
Mary "Butcher by day, masseur by night. I suppose...flesh is flesh...dead ... or alive"
Mary again, to Tracy "Have you always had these murderous urges" (erm...)
Peter "That's one thing you can say about me, I aim low in life. and I still miss"
Sarah "He works in a tanning salon. It's not exactly Microsoft"
Tracy to Toyah "Oh Please. I've had face packs on longer than the two of you have been together"
Maria to a cyber-snooping Michelle "Bunnies and hot water come to mind"
Faye "I've just had a scary bloke with metal sticking out of his face stab me with a needle. Of course I love you"