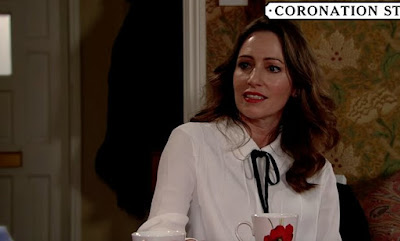 There's an interview in this week's Inside Soap magazine with actress Jo-Anne Knowles, who plays crazy Chloe in Coronation Street.

She says that she was "Absolutely!" a fan of the show before she was asked to act in it. "I've grown up with Coronation Street," she says. "My mum is thrilled that I'm in it as it's a show that she has always loved and finnily enought, my husband was a big Corrie fan when we first met 10 years ago. We used to watch it every single episode and it became part of the beginning of our relationship.  When we moved in together, it was teas on knees with Coronation Street!"

She says she loved the character of Chloe right from the first day she started playing her and that her husband doesn't mind her cosying up to Chris Gascoyne (Peter Barlow) on screen. Lucky lady!

She's big friends with Sally-Anne Matthews (Jenny Bradley). "We've known each other for years," she says. "It would be fantastic if Jenny and Chloe got a scene together. I enjoy my scenes with Bev Callard (Liz McDonald) and we have a real giggle. I am lucky to have scenes with Bill Roache (Ken Barlow) as he is divine and brilliant to work with."

Chloe is the FIFTH Coronation Street character that Jo-Anne Knowles has played. Find out about all of the others here.