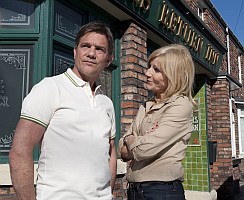 We've got a new bar manager/landlady What do you think of her? The gossips are out in force, filling in Stella on Steve's background. She probably wonders what she's got herself in for. Maybe Steve's wondering the same thing when Stella moves her fella Karl in. Also, her brokenhearted and very shallow daughter, Eva has moved in as well. Her husband/fella appears to be a layabout too, no job. Feckless. Aren't they always? But it turns out he's managed to get a job at the taxi office, twenty feet from his front door just like everyone else. Eva sure seems to be a right cow. I don't care if her "almost" fiance cheated on her, there's no need to take it out on Leanne when she found out Leanne cheated on Peter.

Super Stella not only gives out free drinks but she's a dab hand with armed burglars too. I am curious though, why she was in the betting shop to start with if it was closing time and Leanne was cashing up. She seemed more interested in talking to Leanne than putting a bet on and she doesn't see the gambling type anyway. There's definitely something up though, why would she steal a photo of Leanne from the pegboard? 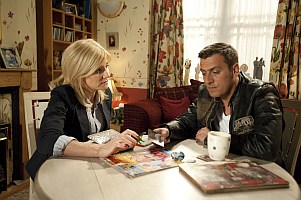 So Peter wants to do something amazing for Leanne's 30th birthday and they're going to have a do in the Rovers? Amazing. Peter looked inside Stella's wallet, something he had no need to do really except he was nosy and the plot device had to have him discover the photo so that he can find out Stella's secret... she's Leanne's bio mother and you can well imagine how Leanne's going to take that! And i have to say, i don't think very much of the actress's emotional "acting"... it was really awful!


Becky, meanwhile, is holed up in a posh hotel at Steve's expense, drinking and partying. Steve can't talk her down and neither could Roy and Hayley but the hotel security did their job finally after how many days of her causing disturbances? Guess she's moving in with Roy and Hayley, then. She claps eyes on Karl and latches on to him but he's not overly interested in spite of her octopus hands in the pub. Good lad. But her trying to make Steve jealous backfired. Just when she decides she might be able to forgive him, he's decided to divorce her. 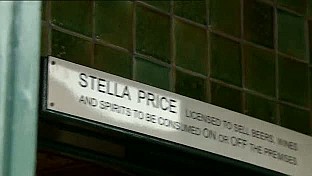 So her next move is to move back in to the Rovers once Steve leaves town and continue the party there. She might want to be in charge but she's not really running the place other than into the ground. Poor Stella must wonder what the heck she's got herself in for! It's party hard in the pub. I wonder how those old tables can actually hold the weight of Becky and Jason both dancing on them! And where was Rosie? She'd have had him by the short and curlies if she'd caught him doing that!

Becky's party drove Norris, Emily, Ken and Deirdre out and into the Bistro. I always got the impression the Flying Horse and Weathy arms are not that far, why didn't they just go there? Ken got so desperate he cut off the end of the power cord but we saw Tyrone fixing it the next day, just in case you missed that, when Becky was dealing with that stroppy delivery man. And I can't actually blame her for going off on one on him. She did apologize and he had no reason to have such a hissy fit. Obvious plot device, really. 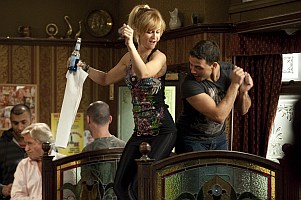 And Jason's birthday party topped the one the night before, if that was possible. Louder noise, more shouting, and a stripper. Ken reached the end of his limits and got a stripper fawning over him, Maria started gobbing off at Frank and Carla and it all turned into a huge bust up with a bar stool through the window just as Steve returned from Brighton to find his pub in tatters and the new Landlady off duty. As Lloyd says, this is war! How's Steve going to get Becky out from under? The two of then were shooting daggers at each other but Stella seems to have been able to talk Becky down a peg or two. 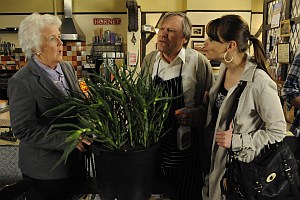 Sylvia is poking and prodding and nosing and trying to find out why Roy and Hayley haven't had children or aren't planning to. She's even grilling the neighbours. Is there a problem? Is there a reason? Ahhh early menopause! That must be it! And j ust when they all decided to go along with the lie, Tracy Barlow comes in and spills all the beans. I was waiting for that! Sylvia had a shock!

I was afraid Sylvia would be horrible about it and she was at first, but it's hard for someone to get their head around that at first, I would think someone from that generation even more so. I loved that Roy stood up to his mother and defended Hayley and naturally Becky would give her hell too.


Sunita refused Dev's proposal flat out and he's not happy about it. Her aunties are shaking things up, and pressing his insecurity buttons. She knows it too. At that, the aunties have retreated back to India and not before time. They were funny the first time around but a bit tedious this time.

Frank seems to be good for the Underworld business but Carla fell apart on the very day an important buyer came to check out the business. Getting the news your mother died can do that to you. Carla can put a front on but she's pretty soft underneath and add a dose of guilt and you've got a mess in stilettos. Doesn't Carla's mother live down near London? She mentioned visiting her when she went there for business. I guess she'll have a long drive on the motorway on the day of the funeral but she seemed to have got there and back in no time so perhaps her mother was buried locally.

Peter's sure jumping to Carla's defence. That doesn't sit well with Leanne and I don't blame her. Peter's in a hard place, though, with Carla needing a shoulder after her mother died. What's a bloke to do? Hand her over to Frank, that's what. And wasn't Nick smug? He really does have the most slappable face, that one. Carla was pretty bladdered after the funeral and she didn't remember a lot of it but gave Norris the sharp end of her tongue when he was trying to poke his nose in. Maria also got all over Carla's business and she should have kept out of it too. Carla knows what Maria accused Frank of so it's her decision whether or not to get involved. Looks like Frank may indeed fancy Carla.

Sean and Dylan are finding a 4 year old boy a bit of a challenge. Marcus seems a lot more relaxed with Dylan than Sean is and Sean is jealous. It looks like Dennis Tanner may be related to Eileen Grimshaw. Us long time fans who knew Elsie's maiden name was Grimshaw have wondered about that for years.

Gary is acting way too possessive of Izzy. Is it a control issue? Is he going to become an abuser? Or is it over-protective? Is his Stress related issues from the army overwhelming him? He's deleting her texts from Will and lying to Izzy about Will checking up on her. There will be hell to pay when she finds out and there was!. 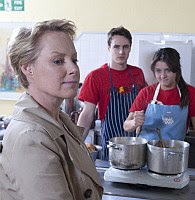 Sally is very condescending about the homeless isn't she? Sophie seems to have got her way, though and is very involved in working for the charity. Now she's helping to organize an auction and is very grown up approaching Nick and Carla for help. Fiz is in a lot of trouble. They've discovered that Joy didn't die of natural causes. Well she did really, but it was assisted by John. Jerry Morton is selling Anna's house and she can't afford to buy it.
Posted by Tvor at 14:03