Julie and Brian, are they the new Mavis and Derek? 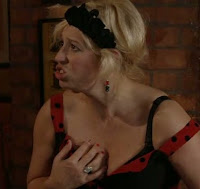 The best storyline this week, bar none, was the coming together of Julie and Brian and it was every bit as fun as I anticipated.

She calls him her Destiny. He's got his head in the clouds around her. Her heart is beating like a trance club and he's beating the pavements trying to keep in shape. For her? Maybe. I don't get the feeling running and Fell climbing were normal passtimes for him.

When they met, they crooned Barbra Streisand and Neil Diamond. They gazed into each other's eyes, very clearly struck by Cupid's arrow. When Julie ran into him again at the school, Dylan in tow,

Her personal fashion statements hit the overdrive in that hot red and black dress and she looked amazing but her confidence was not up in the stratosphere. She drank too much Dutch courage and was all over the place. The best line of the week, though, "Single is the cruelest word on the planet. That, and 'banana'", when questioned, she pulled back another shot, declined to answer and muttered "Still too painful" BWAHAHA!

Then, drunk over dinner, she reckoned Eva was after her man and then even more drunk, trying to accost him in the bar. In the end, she caused quite a scene and it didn't end well.

If Brian manages not to be scared away, it'll be a miracle. Or Karma, as Julie would see it. And maybe that's just what it is, karma. They do seem to be the perfect couple and they have the potential to be a classic double act in the same vein as Mavis and Derek!

If the spoilers are true, they're going to be on our screens for the foreseeable and I for one, can't be happier.

OMG - my husband and I are LOVING the scenes with Brian and Julie. Pure magic and I always eagerly await the beautiful outfits she wears.