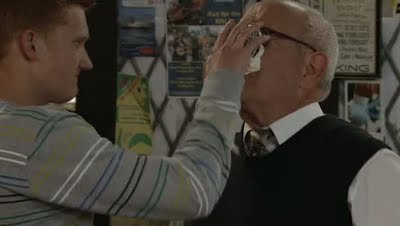 The Deirdre Barlow CakeFace award goes to Norris Cole who got a well deserved cream cake in the face at the hand of Chesney!

Reality check award: Painful star: Becky seems to have had her eyes opened.

Blast from the Past award: The first song they played at the birthday party was the old Spice Girls tune. If you will recall, Leanne used to wear her hair like one of them when she first arrived back in 1997.

Crap birthday pressie award: Ceramic star: Leanne gets her own commemorative plate. And, probably, finding your mum might make it a bit more memorable.

Desperation trumps Christianity award: Gold Star: So much for Thou Shalt Not Steal. But Sophie's paid for that sin, didn't she!? £20,000 worth.

Platt Party hell: I do so enjoy Platt family meals. They are always so entertaining when things blow sky high!

Julia Childs she's not award: Charred Star: Why would we ever think that Kylie would know one end of a kitchen (or barbeque) from the other?

Fashion don't: Just because you're crap with the iron, does that mean you forgot how to button it up properly?

Privacy Award: Sneaky Star: Like the busy cafe is *so* much more private for a confidential conversation than the middle of the street.

Reincarnation award: Spooky star: Even Nick can see that Gail is turning into Ivy Tilsley!

It's the 21st Century award: Gold Star: Kevin, yes you can transfer funds without paperwork these days.

Yet another forgotten storyline: Did Kevin get the hydraulic lift fixed or has it been taken away altogether?

Pants on Fire award for this week: Gold Star: James. Pretty much all week about all things.

Overreaction award: Gold Star: Leanne. I know she's got a bee up her backside about Carla but she was particularly nasty to Peter and it was uncalled for.

Deirdre's pottery talents aren't getting any better are they? 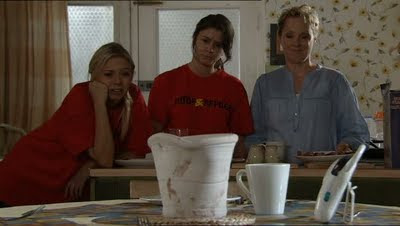 Lines of the week:
Julie about her 'muffin top' "Muffin? I've got more like a large Victoria sponge!"
Norris "I am not a tight fisted ungenerous person" (*koff*)
Mary about Norris "Shake him down, Sophie!"
Audrey "Goodness sakes, this is like shopping bags at dawn!"
David "I didn't have spots!" (you still do under all that fake tan!)
Karl "Eva, put the Diva back in the box" (Nice one)
David "Me mam loves a good moan, it's one of her five a day"
Gail "I will do all I can to help you two" (You have a funny way of showing it)
Kylie "I'm a feminist, me". Audrey "Mrs. Pankhust would be proud?" Kylie "Who's she, me first client?"
Audrey to David "Just because you chose the Creature from the Black Lagoon, doesn't mean the rest of us have to"
Marc to Audrey "You look stunning" (but you don't)
Leanne about the test "This is all new to me, you know" (um, no it isn't)
Gail "Everyone's innocent until proved guilty" Sean "Yes and that doesn't mean by her neighbours"
Deirdre "I sometimes think we've been too soft on Tracy" (Ya think?)
Ken to James "What's mine is yours" (you may regret saying that)
Sylvia about Hope "Father a raving looney and a mother behind bars"
Frank to Carla "If you don't need moral support, you might need someone to hold your coat"


Some great performances this week. Leanne, as always, impresses me to no end. Jane Danson just rocks. And Jennie McAlpine as the beleagured Fiz is also one that I've always enjoyed. Chris Gascoyne has been great, too, as Peter has struggled with the secret and then trying to support Leanne as it whipped out of the closet.
Posted by Tvor at 08:54