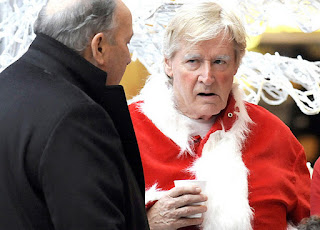 I know Christmas has come and gone and so has the New Year but technically, the Christmas season doesn't end until Twelfth Night, January 6 so I couldn't resist posting this photo. I saw it on the Corrie Canuck blog here and they've graciously given me permission to repost it here.

Ken Barlow as Santa Claus Father Christmas...Remember that? He took the job to earn a bit more cash to buy wee Simon a bicycle during the war of the Grandad's with Simon's other grandfather, George. George, probably deliberately, outed him and Ken got sacked!

Ken, of course, was a traditional Father Christmas and tried to impart on his young charges the values of the season rather than just "want, want, want", much like Percy Sugden did several decades earlier.
Posted by Tvor at 10:40