A Sad Day on the Cobbles 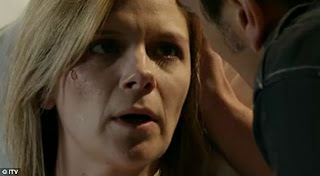 (This post was originally posted by David on the Coronation Street Blog in July 2011.)

This week’s episodes of Corrie so far gave us some of the most emotion scenes we’ve had in a long while. And they were a shining example of just how well Corrie can do drama when the writers put their minds to it.


I am of course talking about the scenes involving Leanne and Peter and Sylvia and Roy (although Sean’s strife at not being able to take Dylan to the Frescos audition almost made the cut).

Firstly, Leanne, who has been a bit of a mardy madam lately, had to go through the heartbreaking experience of losing her unborn child. The scenes involving her and Peter in the hospital were beautifully done and reflected what a strong unit the two of them are.

However, it was the scene at the end of the episode in which Stella came to Leanne and offered a shoulder to cry on that really gave the episode a real emotional punch. Jane Danson was wonderful as ever, sobbing her heart out over a culmination of emotions. She really is one of the strongest actresses on the show and I hope she stays at the focus of things for a while yet, because quite frankly I think we all deserve a break from Jennie McAlpine’s drawling little voice crying about John and Hope.

Then we had the Roy and Sylvia storyline, which marked a turning point in their relationship. We got to see a more human side to Sylvia, especially when she told Hayley that she struggled to love Roy as a baby because he resisted her. It was a very emotional and raw scene, which I haven’t seen on Corrie in a long, long time.

Again, solid performances from all involved made the scenes feel genuine and again it’s nice to see Corrie doing real drama like this because for too long now we have been subjected to Steve and Becky screaming the odds and weekly stunts ranging from rooftop falls to hostage situations.

People can argue all they want about Corrie going off the rails, but as this week showed, there is still a lot that is right on the nation’s favourite street. I hope they keep this up, because I had forgotten that Corrie could actually do real human drama.
Posted by Tvor at 06:48