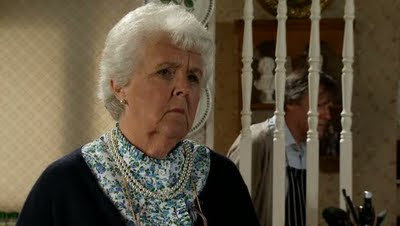 (This post was originally posted by me on the Coronation Street Blog in July 2011.)

A difficult child was how Sylvia described Roy as a little boy. He went rigid when she tried to cuddle him, even as a baby. He preferred to be in his room instead of being around people. She said it was difficult to love a child like that and he overheard her. You could tell it hurt him but she tried to explain. In the end, he actually defended her against Becky's sniping and I think maybe he's starting to realize what it must have been like from her point of view. Perhaps caring for Hope and having paternal feelings brought a new understanding for Roy?

His father left, his stepfather didn't treat him well, either. He had a lonely childhood, some of it by choice. Roy has resentment, Sylvia has regrets though she does love her son. I also think that she did the best she could. Nobody knew back then why Roy was the way he was. As she also said, people thought he was slow or weird, or both. She probably wondered the same herself, sometimes.

Roy is likely somewhat autistic or has Asperger's Syndrome and these days, though there's no cure, it's understood and there's better ways to help children and parents dealing with it. Kids learn with a different process and they can thrive when their parents are understanding and help them properly instead of getting frustrated with them for something they can't help.

We're seeing a thawing in the relationship between Roy and Sylvia, and a slow acceptance between Sylvia and Hayley and the writers and actors are making it into pure gold.
Posted by Tvor at 08:59