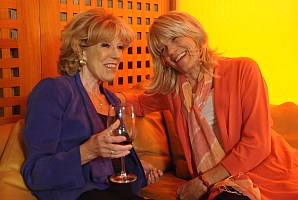 (This post was originally posted by Seanie on the Coronation Street Blog in August 2011.)

This week, I am asking, "Are you a fan of the Marc/Marcia story line?" I thought it a bit bizarre at first, and it's getting worse, unfortunately, I can't stand it to be honest, it's brutal viewing.

Firstly, poor Andrew Hall. While he's trying to do a good job, it isn't coming out well (pardon the pun) I find the storyline very tedious and dull, waiting for the scenes to finish, and I cringe every time I see him on the show.

Of course there have been a few good parts, the bar scene where Audrey throws drinks over the two men was very funny. And, dare I say it, last week's scene with Marc's face in the pie was slightly hilarious.

But apart from that, I'm not a fan of this storyline. It could be great, but not now, and it's a wasted opportunity in my eyes but to be honest, the sooner he leaves, the better, I say. So its a firm NAY from me, and what about you?
Posted by Tvor at 20:20

Email ThisBlogThis!Share to TwitterShare to FacebookShare to Pinterest
Labels: marc/marcia

Hate it! Cringe whenever it's one

Nay! You'd really think Audrey could do something with that wig and fashion sense. And even when he is Marc, I can't stand the way he speaks with his teeth clenched. Not Aud material at all.

I think the storyline could have been a bit better if the actor didn't clench his teeth when he spoke and if they'd find a more stylish wig and wardrobe!

I don't like it at all, he doesn't make a very good looking woman.

No he doesn't, but I would think that was the point of the storyline. He should be easily recognizable as a man when in women's clothing. He's not trying to "pass" as a woman, he just likes to wear women's clothing. Even if he looked the part, with that deep voice he'd never manage it!