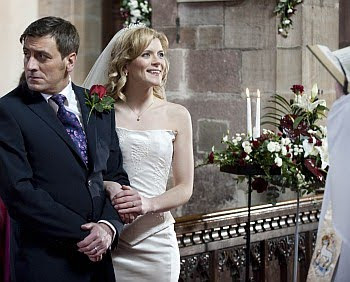 (This post was originally posted by Rebecca on the Coronation Street Blog in July 2011.)
Further to this post about songs reflecting scenes, how about that lovely bit of Johnny Cash we were just treated to? While Leanne was busy berating Peter because he had the audacity to talk to Carla (and after he'd made her a chilli, too!) Johnny Cash's song "I Walk the Line" was playing in the background.

The song is sometimes mistakenly said to have been written by Cash about his second wife June Carter, or even sometimes said to be by Carter about Cash - this I attribute to the film "Walk the Line" in which, frustrated by Cash's drunkenness, she throws empty bottles at him and his friends, telling them "Y'all don't walk no line!". In fact the song appears on Cash's first album Johnny Cash... With His Hot & Blue Guitar, and is written for and to his first wife Vivian Liberto, pledging his devotion to her while he was away on tour:
I find it very, very easy to be true
I find myself alone when each day is through
Yes, I'll admit I'm a fool for you
Because you're mine
I walk the line
Such a lovely song, and definitely a great scene setter for a domestic spat between what is one of my favourite Corrie couples.
Posted by Tvor at 20:56

Speaking of songs, have you noticed that they twice played Billy Joel's "Always a Woman" for Mark/Marcia?

It's great, isn't it! I love listening for the background music!