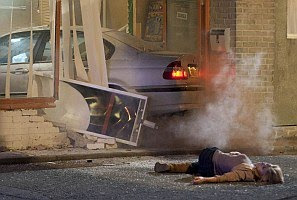 Because Kylie tries to blackmail Audrey with what she knows about Marc, Marc outs Marcia to Audrey's friends and Audrey is embarassed but also shocked at her own reaction. Is this the end for them? Kylie wants forgiveness but it's not forth coming so she takes desperate measures, with David getting caught in the crossfire. Kylie has a lot of bridges to rebuild.

Chesney and Katy are having money problems but cheer up when they see the baby at the scan. Anna and Owen move closer. Becky gets a new job, though not the one she hoped for. Tyrone meets a new woman but doesn't realize someone gave her a nudge in his direction.

Tommy is jealous. Fiz feels threatened and turns to Tyrone who gets into a pickle trying to help. It doesn't have the results they were aiming for but it does end up giving Fiz a boost and she stands up for herself. With Chris and Lloyd at loggerheads, Russ suffers the fallout.

Carla meets Frank's parents, and later, feeling pressurized, she gets drunk and gets behind the wheel, it's Frank that must cover up the deadly results. Stella's life hangs in the balance.


For more detail and photos, see the Moosejaw Mercury at Corrie.net
Posted by Tvor at 12:08