(This post was originally posted by Rachel on the Coronation Street Blog in August 2011.)

Rebecca Callard, daughter of Beverley Callard who played Liz, was on ITV's This Morning earlier today talking about her character Ruth, who makes her on screen debut tonight as a fellow prisoner of Fiz Stape.

Rebecca said that her character will be "formidable, really interesting, hard and tough," and she is something completely different from the characters in costume dramas that she usually plays. 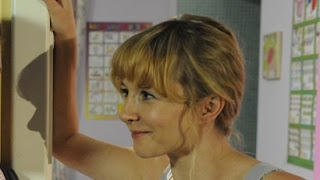 She added that she wouldn't want to be a character relating to Liz, as "it's nice to be doing something for myself." She insisted that although lots of people have said she only got the part because of her mum because that isn't obviously isn't true.

Rebecca will only be in nine episodes at first and she doesn't know if she can come back. She would like to though. I think Ruth sounds like a strong character person even before seeing her on screen, so I hope she does, but what does everyone else think?
Posted by Tvor at 20:34