Mum’s the word for Stella and Leanne 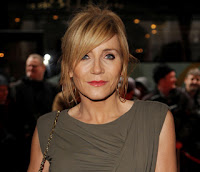 (This post was originally posted by Llewella on the Coronation Street Blog May, 2011, reposted to this blog with permission. And it's a bit late, too. Should have posted this last week!)

Well, we’re only a few days into Stella’s reign at the Rovers, and already we’ve seen the first signs of the storyline that will apparently see her revealed as Leanne Barlow’s long-lost mother – probably sooner rather than later, at this rate.

It was nicely done, the way she quite subtly pumped Ken and Deirdre for information under the guise of idle chitchat, oh-so casually dropping into the conversation that she remembered reading about Peter and Leanne’s hospital wedding back in December. Oh-so casual, except that no one would have remembered all the details, such as Peter’s name, from a random newspaper article they read six months ago – not unless they had a damn good reason to make a careful note of those details, because it mattered to them.

And of course it matters a great deal to Stella, because that newspaper article is evidently how she found out where her long-lost daughter is now living, which makes total sense, and is therefore the reason she has moved to Weatherfield now.

It’s taken her six months to come looking for Leanne, however – she’s evidently been biding her time and it makes sense that she’d have reservations and might be nervous of how she’ll be received by the daughter she lost contact with so long ago, long enough ago that Leanne won’t even recognise her when they finally meet. Maybe she’s been dithering for all those months over whether to come looking for Leanne or not, and then seeing Steve’s advert for a bar manager gave her the push she needed to go for it.

Now that the story is underway, I think it is a real shame that Janice isn’t around anymore. Like her or loathe her, Janice is the only mother-figure Leanne has ever known, and her presence would add a fascinating dynamic to the storyline. Even without her, though, the storyline is bursting with potential.

Leanne needs connections outside of the Barlows - she's been pretty isolated since Janice left and her bust-ups with Carla and Cheryl. This storyline is an opportunity to explore her background a little more - to find out why she ended up being raised by her dad, why her mum left her, and how she really feels about it. She almost never talks about her mum - is that because she doesn't care, or because she has buried those feelings of abandonment as deep as possible? Is that sense of having been abandoned by her own mother perhaps part of the reason she latched onto motherless little Simon so very strongly? Plus, by creating this connection between Leanne and Stella, the new family are given instant links to established characters on the show, which should help them bed in.

I’m really fascinated to see how the story unfolds from here.
Posted by Tvor at 19:42